Lowe’s comments were interpreted by the market as an indication of the RBA’s willingness to follow up its two 25 basis point cuts so far this year with further cuts to a cash rate that stands at only 1 per cent.

The RBA’s hand may, however, be forced by developments offshore.

On Tuesday and Wednesday, the US Federal Reserve’s Open Market Committee meets and is almost universally expected to cut its equivalent to the RBA’s cash rate for the first time in more than a decade.

The only question mark for most in the markets is whether it will cut by 25 or 50 basis points, although the latter seems unlikely given that the US economy, while slowing, is still producing reasonably solid growth and US unemployment is at historic lows.

As important for the Australian dollar as what the Fed does, is what it indicates it might do in future.

The probability of a 25 basis point Fed rate reduction and a consequent narrowing of the rate differentials between Australia (and other economies) and the US should already be priced in to currency markets. 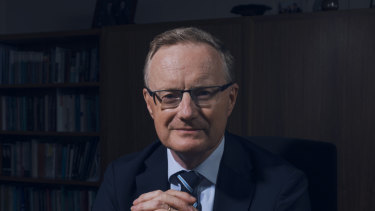 RBA governor Philip Lowe. His hand might be forced if the US dollar starts to depreciate.Credit:James Brickwood

If the Fed were to indicate a more aggressive approach to lowering US rates, however, the US dollar could be expected to strengthen against other currencies, which would in turn cause their central banks, including the RBA, to consider matching the reductions to avoid growth-threatening currency appreciations.

A strengthening of the US dollar, which is up about 2 per cent this year against the currencies of its major trading partners and nearly 4 per cent in the past 12 months, has been a rational outcome of the higher economic growth rate and interest rates in the US.

While the US economy does appear to be slowing, it is still performing more strongly than most of the major economies.

The eurozone is on the verge of a recession and China’s growth, while still impressive, has fallen back to its lowest levels in nearly three decades. Australian GDP growth was running at a modest 1.8 per cent in the June quarter.

So it makes sense that, even if the Fed does cut US rates, the US dollar should remain relatively strong.

US President Donald Trump, however, doesn’t agree. He believes the eurozone and China are depressing – manipulating – their currencies to gain competitive advantage and blunt the impacts of US protectionism.

Only last week, he met with senior advisers to discuss whether and how the US could intervene to weaken the greenback, with the discussion reportedly ranging from the option of just “talking down” its value to using the US Treasury’s $US94 billion ($136 billion) exchange stabilisation fund.

While Trump’s senior economic adviser, Larry Kudlow, said the option of intervening had been ruled out at the meeting, Trump disagreed.

“I didn’t say I’m not going to do something,” he said on Friday.

By itself, Treasury couldn’t have much lasting impact on the US dollar’s value – its stabilisation fund is immaterial in the context of currency markets that turn over more than $US5 trillion a day.

If the Fed were prepared to help out in selling US dollars and buying up euros, renminbis, Aussie dollars et al, it would be feasible.

The Fed is, however, unlikely to allow itself to be co-opted into a process that would inevitably trigger a large-scale currency war that would be even more destructive of the global economy than Trump’s trade wars.

The Fed is unlikely to allow itself to be co-opted into a process that would inevitably trigger a large-scale currency war.

An orchestrated devaluation of the US dollar would only work if the other major economies helped facilitate it and, given the state of the eurozone, Japanese and Chinese economies, it is almost inconceivable that they would help the US weaken their own economies further.

The risk that the US could continue to reduce its interest rates and/or that Trump might try to “jawbone” or act to devalue the US dollar is, however, a real one and one that will have other central bankers considering their own options.

For the RBA, that would mean more rate cuts and, given how little room it has left to manoeuvre, some less conventional measures once the cash rate hits zero.