Bridget Kennedy, one of the organisers of Repair Cafe Sydney North in Lane Cove, said people were often surprised at how many things could be easily repaired.

“So many people think if a toaster, for example, is broken, it can’t be repaired but a lot of time it’s really simple to repair,” Ms Kennedy said. “Sometimes it just needs a really good cleanout to get all the breadcrumbs out of the circuitry, it’s amazing what breadcrumbs can get into.”

The service is free but you are expected to be an active participant in the repairing. “It’s not a matter of dropping it off and going away, the idea is to stay and learn and participate in the repair,” Ms Kennedy said. 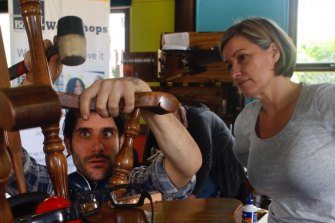 Mr Verbist said most of the attendees were motivated by the desire to “do the right thing” when it came to the environment, without paying the high prices charged by professional repairers.

Ms Kennedy said another big benefit was the “connectedness to community”.

“You’re sitting across from someone and sharing skills with them and having a conversation – sometimes there’s a story behind the object – and there’s this time that’s been put aside to do it,” she said. “We feel like we’re not only repairing objects, we’re repairing community.” 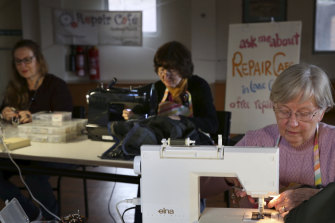 The Bower also runs regular and one-off repair cafes for a number of councils, including Parramatta, Canada Bay, Georges River, the Inner West and Northern Beaches.

The Bower is fighting an ongoing eviction battle with the Addison Road Community Centre in Marrickville; the shop and head office are still there but the repair cafes have moved.

Repair Cafe Sydney North operates on the first and second Sunday of the month in a venue supplied by Lane Cove Council.

Each repair cafe has a different emphasis depending on the skills of the volunteers. Ms Kennedy said Repair Cafe Sydney North specialised in repairs to clothing, shoes, jewellery and spectacles, and also did household appliances and taught tool and knife sharpening.

The Bower recently raised almost $17,000 through a crowdfunding campaign to help fund its repair cafes and other projects, including a lobbying campaign to “fight for your right to repair”.

Mr Verbist said manufacturers too often planned for products to become obsolete and made repairs difficult by gluing plastic parts together rather than using screws. He said Australian lawmakers could learn from other countries such as Sweden, which offers tax deductibility for repairs, and France, which requires manufacturers to provide repair manuals and spare parts.

Caitlin Fitzsimmons is the associate editor of The Sun-Herald and a columnist.

100 million Capital One customers were hacked — everything you need to know about...