It is trying to turn itself around, but has faced hurdles such as allegations of money laundering and failed stress tests.

Its attempt to create a German champion through a merger with Commerzbank failed in April.

Shares in Deutsche, which have recently traded at record lows, were up 1.4 per cent in late trading in Frankfurt, shedding some of their gains but still topping the list of German blue-chip companies.

Deutsche said in an emailed statement in response to the FT report that it was “working on measures to accelerate its transformation so as to improve its sustainable profitability. We will update all stakeholders if and when required”.

The restructuring costs will force the bank to officially walk away from a key profitability target, Germany’s Handelsblatt reported separately later on Monday. 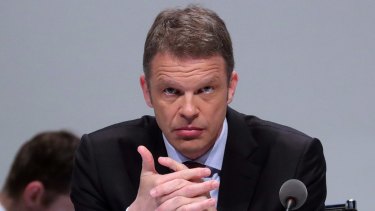 The bank had aimed for a 4 per cent return on tangible equity, but most analysts have long believed the bank would miss the target.

The bank declined to comment on the Handelsblatt report.

The effort by Sewing to overhaul the bank marks a further shift by the German lender away from investment banking to focus on more stable forms of revenue, such as transaction banking.

The bank is planning cuts at its U.S. equities business, including prime brokerage and equity derivatives, to win over shareholders unhappy about its performance, four sources familiar with the matter told Reuters in May.

Deutsche created a similar division for non-core investments in 2012 with 128 billion euros in risk-weighted assets. Deutsche wound up the unit nearly four years later, in 2016.

Sewing is expected to announce changes in July. The bank reports second-quarter earnings on July 24.