The president has claimed several times this year and as recently as Friday in a Fox & Friends interview that the US stock market would be 5,000 to 10,000 points higher if the Federal Reserve hadn’t raised interest rates four times in 2018.

He also tweeted in February that “had the opposition party” won in 2016, “the Stock Market would be down at least 10,000 points by now” – an unprovable assertion. And in January Trump suggested that if “you want to see a Stock Market Crash, Impeach Trump.”

“We have never had a president so aware of where the stock market is and how much it is up or down on the year,” Chris Rupkey, chief financial economist at MUFG Union Bank NA, said in an email.

Research by Macrotrends shows the Dow Jones Industrial Average’s performance so far in Trump’s term has been middling compared with his predecessors, and trails the gains made under Democrats Barack Obama and Bill Clinton. It’s a touch above the gains logged under Republicans Ronald Reagan and George H. W. Bush; George W. Bush had presided over a losing market at this point in his first term.

The benchmark S&P 500 index made a record high in early May before slipping in the face of Trump’s stepped-up trade war with China. The more narrow DJIA, whose performance Trump likes to reference, last peaked more than eight months ago, on October 3.

The Dow posted 71 record high closes in 2017, starting within a week of Trump’s inauguration, and another 15 in 2018, helped by the passage of a Republican tax bill. 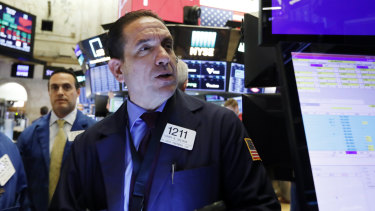 According to research, the Dow Jones Industrial Average’s performance so far in Trump’s term has been middling compared with his predecessors, and trails the gains made under Democrats Barack Obama and Bill Clinton.Credit:AP

As Trump kicks off his re-election campaign, the chances of a recession starting in the US within the next year have risen to 30 per cent from 25 per cent a month ago, according to a June 7-12 survey of economists conducted by Bloomberg News.

Whitehall fails its own late-pay test | Business | The Sunday Times – The...