Financial markets, in the wake of such clear language from the governor, believed an interest rate rise some time in 2019 was a certainty.

One of the few who thought otherwise was AMP Capital chief economist Shane Oliver who predicted in December the RBA’s next move would be down.

He’s blunt in his assessment of the RBA’s reading of the economy then.

“They just got it wrong,” he said.

The reckoning came on Tuesday when Dr Lowe made clear the bank would next month be looking to take the cash rate lower than the 1.5 per cent it has been sitting on since August 2016.

Admitting the bank’s target for unemployment and inflation simply can’t be met with current monetary policy settings, the governor also made the case for extra spending by governments and “structural policies” to help businesses expand and employ more staff.

It’s the biggest change in direction by the RBA since 2008 when the bank lifted rates early in the year and then slashed them months later as the Global Financial Crisis hit.

That directional change was driven by the biggest global economic hit since the 1930s.

The Reserve Bank board is now changing direction because of a suite of different factors, and this time the risks to key parts of the domestic economy could be considered larger.

Dr Lowe made the case for a cut on several grounds but the most prominent was a national jobs market, with unemployment at 5.2 per cent, that is failing to drive up wages and as well as inflation.

Around the globe, central banks are confronting the same issue and they have their cash rates lower (and their unemployment rates below that of Australia). Only a week ago, the Reserve Bank of New Zealand cut its cash rate to 1.5 per cent with a jobless rate of 4.2 per cent.

An even bigger concern is that unemployment has edged up over the past two months with growing signs of a slowdown in the jobs market. The Department of Jobs on Wednesday reported jobs advertised on the internet in April fell to a 23-month low with the annual rate at its weakest since 2013.

Former TD Securities economist and adviser to former prime minister Julia Gillard, Stephen Koukoulas, was another to predict in December the RBA would be cutting rates instead of increasing them.

He said the Reserve had been caught by the softness of the economy, failing to appreciate the real level of under-employment and what that meant for household incomes that were already stressed because of low wages. 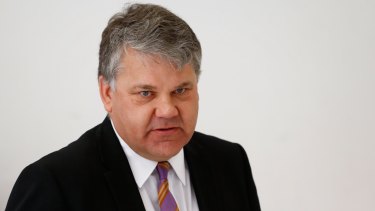 “The emphasis has been on the unemployment rate but once you look at under-employment you see households are struggling,” he said.

“Around the world, in the UK, the US, across the Tasman in New Zealand, these are countries with much lower unemployment rates and they are still having trouble getting wages and inflation up. Australia is part of that phenomena.

“Factor in the fall in house prices and that wealth effect, which the Reserve was denying was a factor for so long, and you get to this point.”

While Dr Lowe was clear cuts were on the agenda to drive down unemployment, he and the Reserve Bank know that lower rates will feed into the housing market and potentially housing prices.

Australian households are already among the most indebted in the world. By the RBA’s own figures, the nation’s households effectively hold $190 worth of debt for every $100 of disposable income.

Only Denmark, Norway and the Netherlands have higher household debt levels.

And while debt continues to increase, the value of assets is starting to fall. Again, RBA figures show the ratio of housing asset value to disposable income peaked in late 2017 and has fallen more than 6 per cent.

At the same time, interest payments are gobbling up an increasing share of household income. It’s now at its highest level since before Tony Abbott won the 2013 election.

The other side of the debt coin is housing affordability.

Even with the falls in Sydney and Melbourne property prices over the past 18 months, they are still not affordable compared to just about every other city in the world.

“The affordability is terrible. It’s improved but it is still terrible,” Dr Oliver noted.

On the day Dr Lowe announced the RBA’s new direction, the Australian Prudential Regulation Authority (APRA) flagged it would loosen lending standards in a bid to get commercial banks to lend out more to potential home buyers.

Some analysts predicted this measure would deliver a major boost to the housing market.

But Dr Oliver, who estimates around 60,000 jobs have been lost from the construction and associated real estate sectors because of the slump in activity over the past 17 months, said there was little chance of a surge in prices as happened after the RBA started cutting rates in 2011. 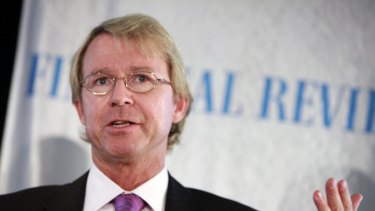 Shane Oliver says despite the recent fall in Sydney and Melbourne house prices, housing affordability in both cities is still terrible.Credit:Jim Rice

“When we saw when other changes were made to lending, like the restriction on interest-only loans, some argued that this was a turning point. That’s not what happened,” he said.

“The NSW and Victorian economies aren’t going to bounce like they did last time. The federal government’s plan for first time buyers only affects 10,000 people so that’s really small.

“I don’t think we’re off to the races in terms of prices this time.”

The other issue, closely related to sluggish wages growth, is household disposable income.

Dr Lowe noted that the economy is struggling in large part to the failure of households to get a solid lift in income. For the past three years, household income has averaged 2.75 per cent rather than the 6 per cent of the preceding decade.

Part of this is due to the federal government increasing its tax take. The governor noted efforts such as better matching of data by the ATO, which had delivered the revenue to improve the budget bottom line, had come at an economic price.

Hence the plan to drive rates lower in a bid to get businesses and households to spend and expand with the ultimate goal to get incomes growing.

In the wake of Dr Lowe’s speech, markets put the chance of a quarter percentage point rate cut at the RBA’s June meeting at 92 per cent. They believe by year’s end the cash rate will be just 1 per cent with a risk it could go even lower.

A year ago the same markets, most economists and the RBA believed it would be a very different story.

Shane is a senior economics correspondent for The Age and The Sydney Morning Herald.

Business this week – The Economist