The strong pound has pulled Britain’s stock market into the red.

Just in: Donald Trump has denied that America’s economy is struggling (despite today’s weak PMI report)… but taken another swipe at the Fed for not cutting interest rates faster.

The Economy is doing really well. The Federal Reserve can easily make it Record Setting! The question is being asked, why are we paying much more in interest than Germany and certain other countries? Be early (for a change), not late. Let America win big, rather than just win!

Time for a quick recap.

Angela Merkel: ‘I did not set 30-day deadline’.

“I said that what one can achieve in three or two years can also be achieved in 30 days.”

“It is not about 30 days. The 30 days were meant as an example to highlight the fact that we need to achieve it in a short time.”@Reuters

America’s yield curve has inverted again – a sign that bond investors are concerned to hear that US factory output is shrinking.

Typically the longer-dated debt would trade at a higher yield, giving a better rate of return to make up for the risk of lending for longer.

Some snap reaction to the news that America’s manufacturing is now (just) shrinking. 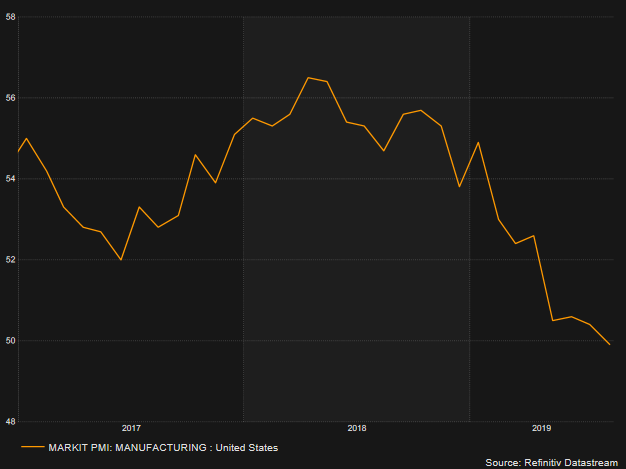 Not a great look for US manufacturing (granted ISM more closely watched than Markit PMI) -> pic.twitter.com/bbOTac1FxH 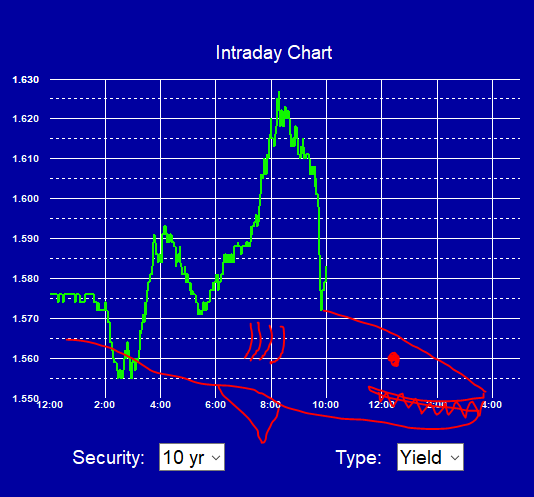 US Markit PMI in at 49.9 which is line with hard manufacturing data which indicates the domestic manufacturing sector is in recession.

Here’s the US PMI report (only a flash estimate, as we’re still in August of course)

Newsflash: America’s factory sector is shrinking for the first time in almost a decade – a sign that the trade war with China may be hurting.

Data firm Markit has just reported that its US manufacturing PMI has fallen to 44.9, down from 50.4 in July.

This is the first time since September 2009 that this PMI has dropped below 50.0 – the point that separates expansion from contraction. 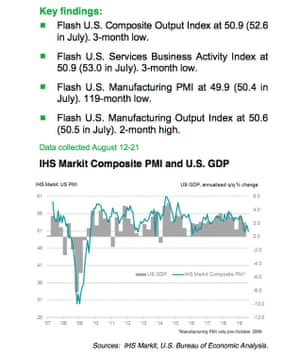 This is going to fuel concerns that the US economy is slowing.

August’s survey data provides a clear signal that economic growth has continued to soften in the third quarter. The PMIs for manufacturing and services remain much weaker than at the beginning of 2019 and collectively point to annualized GDP growth of around 1.5%.

The most concerning aspect of the latest data is a slowdown in new business growth to its weakest in a decade, driven by a sharp loss of momentum across the service sector. Survey respondents commented on a headwind from subdued corporate spending as softer growth expectations at home and internationally encouraged tighter budget setting.

Manufacturing companies continued to feel the impact of slowing global economic conditions, with new export sales falling at the fastest pace since August 2009.

Business expectations for the year ahead became more gloomy in August and remain the lowest since comparable data were first available in 2012. The continued slide in corporate growth projections suggests that firms may exert greater caution in relation to spending, investment and staff hiring during the coming months.”

The pound has just jumped, after Angela Merkel played down the suggestion she’s set Britain a new 30-day deadline to solve Brexit.

Yesterday, when meeting Boris Johnson, the chancellor said the conundrum of the Irish backstop could possibly be solved within 30 days.

But speaking in the Netherlands today, Merkel denied this was a new, hard deadline of mid-September.

She said her comments were was merely “an allegory for being able to do it in a short period of time”.

It would be better to say one can achieve that by October 31.

This has pushed sterling up by a whole cent against the US dollar, to $1.225.

$GBPUSD: Sterling surging as the UK and Brussels battle over the Irish backstop with the possibility of renegotiating the #Brexit withdrawal agreement hinted at by Germany’s Merkel in contrast to comments from France’s Macron pic.twitter.com/utL3HpIDWw

I’m not sure this is a major development, though. Brussels hasn’t shifted from its position that a hard border in Ireland must be avoided. The backstop is an insurance plan against that — Johnson needs to come up with a better idea quickly. 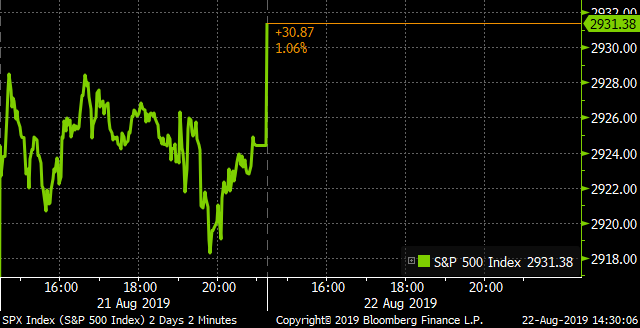 Barely a day goes by without Donald Trump undermining the Federal Reserve’s independence… and he’s just done it again.

The president is still fuming that Germany sold over €800m of 30-year bunds at a negative interest rate on Wednesday (meaning investors won’t get any return at all).

This, Trump feels, is further evidence that US interest rates are too high and should be cut.

Germany sells 30 year bonds offering negative yields. Germany competes with the USA. Our Federal Reserve does not allow us to do what we must do. They put us at a disadvantage against our competition. Strong Dollar, No Inflation! They move like quicksand. Fight or go home!

But.. it’s not clear that German’s record low bond yields are a reason to celebrate. They reflect concern that Europe’s economy is weak, with low growth and inflation, and the prospect of a new bond-buying programme from the ECB soon.

Another retail survey has been released, which backs up the CBI’s gloomy assessment of the sector.

The latest IMRG Capgemini eRetail Sales Index shows that online spending fell by 5.7% in July, compared with June. This dragged the annual increase in web spending down to just 4.4% – much weaker than the 10% averaged over the last five years.

This slowdown came despite the hot weather in July (which might have encouraged online purchases of summer clothes and kit), and Amazon’s Prime Day – copied by many other retailers who offered their own sales.

Online sales growth had been subdued throughout the first half of 2019, but in June there seemed to be a bit of a bounce-back that hinted toward growth picking up again.

However, there is now evidence that the June performance was artificially inflated by heavy discounting to stimulate sales activity, and it seems likely that some of that volume was pulled forward from July.

Mutual Funds Weekly: How an income portfolio can take away some of the uncertainty...