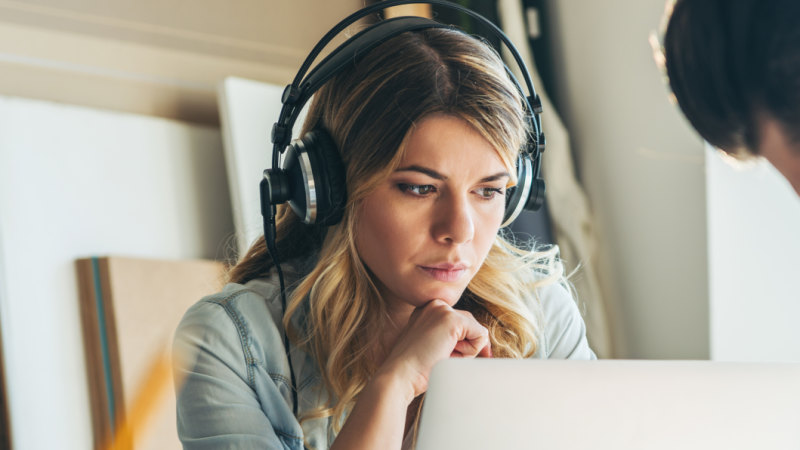 It’s also increasingly common to wear noise-cancelling headphones to drown out the din of a noisy office – though this might not be such a good idea if you are particularly prone to jumping when your colleagues suddenly appear behind you.

Sony recently commissioned YouGov Galaxy to survey 1051 Australians about noise pollution in offices. Of course Sony has a vested interest in selling headphones, nonetheless the results strike a chord.

The most common forms of noise pollution identified in the research are colleagues talking or laughing too loudly, telephones ringing and not being answered, colleagues sniffing or sneezing or coughing, and nearby construction.

More than half of workers say noise pollution makes it harder to concentrate or stay focused, while nearly half also say it makes them irritable or annoyed. The most common solution is simply to try to ignore the unwanted noise, but 26 per cent of workers are dealing with it by wearing headphones to listen to music or a podcast.

There’s apparently a generational divide, with the research suggesting one in three Millennials would wear headphones to drown out office noise, compared with one in 10 Baby Boomers. Millennials are also more likely than Baby Boomers to think noise cancelling headphones will improve their productivity, at 58 per cent versus 28 per cent. Across all ages, 57 per cent of those working in an open-plan office believe noise cancelling headphones will increase their productivity at work.

Anecdotally I know many older workers wear headphones too but to the extent the generational divide is real, it could generate friction. One women told me she has rarely worn headphones in the office since she was told off by a former boss who disliked the fact he couldn’t speak to her whenever he wanted without signalling first.

I’m all for the rise of headphones in the office. Our focus is crucial to our ability to perform at work. It’s already being shred like confetti by our smartphone addiction and other digital distractions so it’s worth doing whatever we can to protect it

In Cal Newport’s bestselling book Deep Work: Rules for Focused Success in a Distracted World, he writes compellingly about how the ability to cut out distractions and do deep work is like a “super power” for your career. Most people have either lost that ability or never developed it in the first place, so it is the single most important thing that can set you apart from the crowd.

Open-plan offices are here to stay. Employers have clearly decided the amount they save on rent more than compensates for any loss of productivity from distraction and noise. There’s also an argument to be made for open-plan spaces leading to increased collaboration. But there are downsides, and looking for a DIY solution is a smart initiative.

Of course, it’s best not to take it too far. It’s like advice that tells you to only check email or other messaging systems such as Slack once a day – that’s all very well, but what about the colleagues or clients or partners who are waiting on you?

The whole reason to be in an office together is to be available for each other – to collaborate, consult, communicate – and sometimes that means fitting in with others’ timetables. If you’re always here-but-not-here, you might as well work from home.

Caitlin Fitzsimmons is the associate editor of The Sun-Herald and a columnist.

At Disneyland’s new ‘Stars Wars’ attraction, brace yourself for $200 lightsabers, $12 beers and...