Trump has taken to blaming others for the recession fears, mostly the Federal Reserve, which he is pushing for further interest rate cuts. Yet much of the markets’ uncertainty stems from his own escalation of a trade war with China, as well as weakened economies in key countries around the world.

Some of Trump’s closest advisers have urged him to lower the temperature of the trade dispute, fearing that further tariffs would only hurt American consumers and rattle the markets further. The president blinked once this week, delaying a set of tariffs in an effort to save Christmas sales.

Aides acknowledge it is unclear what steps the White House could take to stop a downturn. Trump’s 2017 tax cut proved so politically unpopular that many Republicans ran away from it during last year’s midterms. And a new stimulus spending program could spark intraparty fighting over big deficits.

The hope among administration officials is that a mix of wage gains and consumer spending will power growth through 2020. Yet Trump knows his own survival hinges on voters believing that he alone can prolong the economy’s decade-plus expansion.

“You have no choice but to vote for me because your 401(k), everything is going to be down the tubes,” the president said at a Thursday rally in New Hampshire. “Whether you love me or hate me, you’ve got to vote for me.”

Trump has spent much of the week at his New Jersey golf club, many of his mornings on the links, his afternoons watching cable television and his evenings calling confidants and business executives to get their take on the market’s volatility.

Though he has expressed private worries about Wall Street, he is also skeptical about some of the weaker economic indicators, wondering if the media and establishment figures are manipulating the data to make him look bad, according to two Republicans close to the White House, not authorized to discuss private conversations.

His skepticism has been reinforced by White House officials who have long been inclined to only show Trump rosier economic assessments.

Amid the market turmoil this week, the president tweeted out defenses of his economic record.

I think we’re heading down that road to recession – we’re on that steady march toward that inevitable conclusion,

Scott Anderson, chief economist at bank of the West

He blasted the Fed for not cutting interest rates deeper, under the belief that sharper cuts would lead to more lending activity and make the US dollar more competitive against foreign currencies. The president also highlighted the strength of consumer spending – as retail sales have jumped 3.4 per cent from a year ago.

Yet his focus on the Fed may be counterproductive.

The Federal Reserve voted last month to trim rates for the first time since 2008, a step taken to insulate the economy against trade uncertainty. But consumers interpreted that as a precautionary move ahead of a downturn rather than as part of an effort to keep the economy growing, according to the University of Michigan’s consumer sentiment survey released Friday.

Consumer confidence has dropped 6.4 per cent since July. The pessimism could worsen if the Fed decides to slash rates in accordance with Trump’s wishes.

“Additional cuts in interest rates would act to increase consumer apprehensions about a potential recession,” said Richard Curtin, director of the survey.

One sector already suffering this year is manufacturing, the very industry that Trump pledged to revive and fortify with his tariffs. Factory output has fallen 0.5 per cent during the past 12 months, the Fed said Thursday. 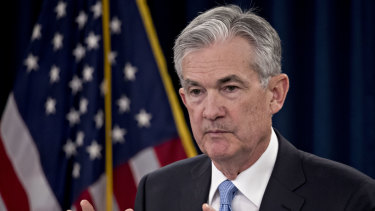 Fed chair Jay Powell has been a frequent target of the President.Credit:Bloomberg

There are a few steps the government could take to help manufacturing and the economy, said Linda Dempsey, vice president of international economic affairs at the National Association of Manufacturers.

Congress could approve the updated trade agreement among the United States, Canada and Mexico – which would protect the North American supply chain. Secondly, the government could renew the soon-to-expire charter for the Export- Import Bank. But reconciling the situation with China is tricky because it involves negotiations between two countries with competing interests.

“That requires two sides – it’s not something the United States and our own political environment can deal with,” Dempsey said.

Most economists – including Fed officials – still expect the economy to grow this year, just at a slower pace than last year’s 2.9 per cent.

A senior White House official said the growth in the second quarter this year was artificially low because of unusually bad weather and problems at Boeing that hurt aircraft production. Thus the baseline economy might be stronger than many forecasters think.

Financial markets on Wednesday pointed to a possible downturn as the interest rate charged on a 10-year US Treasury note fell below the rate on a 2-year note. That event has traditionally foreshadowed a recession. But the Trump official said it might have lost its predictive power because of the low rates and other policies of central banks worldwide.

But the falling rates on US Treasury notes indicates that the recession countdown clock is now ticking, said Scott Anderson, chief economist at Bank of the West.

The only challenge is figuring out when that alarm bell might ring.

“I think we’re heading down that road to recession – we’re on that steady march toward that inevitable conclusion,” Anderson said. “It’s just that drip, drip, drip of trade war anxiety that is hanging over market sentiment.”

What Game Of Thrones Teaches Us About Business – Forbes

This 23-year-old has made $120,000 buying and selling Instagram accounts