Stokes needs new blood. He wants someone who can match the strong ratings performance with revenue gains.

Back in May Seven issued a profit warning for 2019 earnings, citing soft conditions across the sector. The share price has fallen more than 28 per cent since February.

And while Stokes  engaged in a high-profile legal stoush in 2011 with Warburton after he defected to the rival Ten Network, the wounds have since healed. Warburton, who hails from an advertising sales background, now represents fresh blood and dynamism.

But Stokes says he is not confining his search for revenue sources to traditional or even non-traditional media.

“James’ [Warburton] brief is – nothing’s in and nothing’s out. You come to us with what you think is going to provide the best opportunity for Seven West Media and he will take that on board,” Stokes said on Friday.

Indeed he points to Seven West’s parent, Seven Group Holdings, which Stokes notes went from being reliant on media in the past to one that now derives revenue from a variety of sources of which media is only a fraction.

So attention will now become focused on where Seven West may attempt to spread its tentacles. In the wake of Nine’s deal with Fairfax last year, there was plenty of speculation of a deal between Seven and Murdoch’s News Corp. 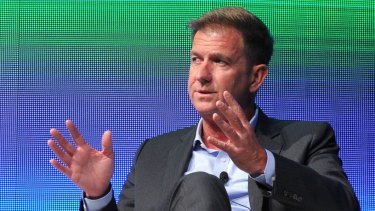 Times up for Tim Worner at Seven.Credit:Vince Caligiuri

When quizzed about the possibility of deal Stokes laughs and asks, “have you (recently) negotiated your Foxtel subscription price?”

However, history is littered with suggestions that at various times Seven has looked at a deal with Foxtel.

“Sometimes we are defined by what we don’t do rather than what we do do,” Stokes says dryly.

Warburton, however, is the man charged with finding a new path for Seven and executing its shake-up.

But this won’t be Warburton’s only task. Stokes will undoubtedly be looking to have him sweat the assets harder, improve advertising revenue and stay on top of costs.

Stokes believes Warburton will be a superior free to air industry lobbyist – one who can work more cooperatively with competitors for the greater good of the sector.

“We need a stronger industry focus….traditionally in television and and print we have all been a bit stupid in our competition with each other. We have allowed that to divide us in the marketplace. We have given a really good opportunity to the Facebooks and everyone else while we have been divisive,” Stokes bemoans.

“Also we need to say (to advertisers) that it isn’t just the online platforms that have an audience. The audiences we deliver are both unique and important.

In this he sees a lesson for our banks.

In his view the banks wouldn’t have the problems they are experiencing today if they had continued to advertise on television and in print.

“Having dropped traditional media almost entirely they found themselves totally exposed,” he says.

Meanwhile, the changing of the chief executive guard certainly looked brutal by normal corporate standards. No long handovers, no earn out periods – just out with the old (barely time to pack up the box and gather the framed photos and pot plants) and in with the new. Warburton will be placing his posterior on a warm seat.

Happily for Stokes, Warburton, whose previous gig evaporated when the company he ran, APN Outdoor, was taken over late last year by JCDecaux, was available.

And after six years as chief executive at Seven West, Stokes said Worner’s departure “wasn’t an easy decision. We arrived at a point with Tim that we needed to change something so we could move forward”.

“No one could have asked anyone to have done more for the company than Tim has done for Seven.

“I have been involved with him for 25 years since he revolutionalised the way we covered football in Melbourne.”

And the market appears to appreciate the absence of sentimentality – pushing the stock up 12 per cent immediately following the new chief executive announcement.