Accounts obtained by The Sunday Age and The Sun-Herald recorded revenue of €77.6 million ($128.1 million) for Australia in 2017 down from €88.4 million in 2016. The financial results do not provide details of profit by country.

Subway’s issues in Australia echo worldwide problems for the brand after the death of Subway’s billionaire founder Fred DeLuca in 2015 and the conviction of Subway ambassador Jared Fogle for child sex and pornography offences.

A Subway spokesperson said it had 1353 stores across Australia, including those temporarily closed for renovation, and had “no intention” of reducing its footprint.

“While Subway anticipates restaurant growth over the coming year, it will only consider new sites where they are commercially viable,” the spokesperson said.

Trying to get out

Consumers looking for healthier food are bypassing Subway and the franchise is trying to reinvent itself in a low-carb world adding menu items such as wraps and rye bread.

“Over the past 10 years, the tastes and the palates of our Australian guests have changed quite significantly, and what they’re looking for, for their lunch or for their dinner has changed as well,” Subway’s spokesperson said.

Local Subway franchisees claim they are struggling to survive and a significant number are trying to sell their stores.

The website Commercial Real Estate lists 125 Australian Subway stores for sale with prices ranging from $98,000 to $495,000.

The Sunday Age and The Sun-Herald  has spoken to a number of franchisees who complained about their treatment by the chain but none would speak out publicly due to fear of retribution.

One Subway franchisee who has their store for sale for $150,000, half the price she bought it for three years ago. 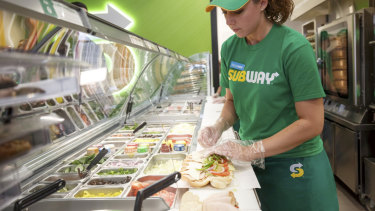 The company has been trying to reposition its offering to keep customers who are looking for healthier options.

“Some weeks I work for free, especially when it is raining and in winter some months it is very bad. I am very stressed at the moment.”

Adding to this pressure are renovations mandated by Subway in a bid to boost its flagging fortunes.

In the US, Subway is contributing to the cost of these refurbishments but in Australia franchisees are expected to fund the refurbishment themselves.

My life is hell now. I am stuck.

The franchisee said the renovation, part of Subway’s “360-degree brand transformation”, will cost her about $200,000.

“The renovation clause is very high to renovate the store,” she said. “I cannot afford it. I am in too much debt at the moment I have taken out a lot of personal loans to survive. If I take another loan from the bank I cannot pay as it is too high. My life is hell now. I am stuck.”

A spokesperson for Subway said it was in the process of opening “next-generation flagship Subway restaurants” across the country and by the end of the year expected 20 per cent of its stores will comply with its “bold and vibrant design”.

The franchisee said she is struggling to attract buyers for her store as a result.

“I have only had one or two inquiries. They can see so many stores for sale they know there is something happening with Subway,” she said. “I can’t lie to them.”

Another franchisee said it was difficult to fund refurbishments when performance had been poor in the past few years.

“The refurbishment is hurting the business,” he said.

Franchisees also complained about the limited suppliers who could undertake the renovations.

“The renovations are to be done only through Subway-approved shopfitters whose prices are almost double other reputed companies,” a third franchisee said.

The franchisees complained they were pressured into buying Grinders coffee machines through Coca-Cola at a cash investment of about $5000 each which had now been “almost junked” by most Subways.

The franchisee with her business on the market said she bought a coffee machine but was unable to sell even one coffee a day.

“That machine is now in the cupboard and they have introduced a new panini press which has to be on the counter,” she said. “They push every time to buy new things, new things, you have to buy this and that. We are not making money we are just surviving.”

Subway franchisees pay 8 per cent of revenue to Subway as a licence fee alongside an advertising levy of 4.5 per cent, however franchisees are now facing an additional cost after Subway introduced a loyalty program this year called the SubCard App. 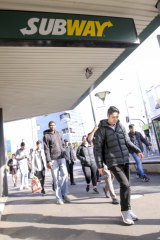 Subway was the subject of a complaint to parliament’s inquiry into the Franchising Code of Conduct. Credit:Wayne Taylor

The system replaces existing loyalty cards and franchisees say they have been approached by Subway staff and told if they do not join the program they will be marked out of compliance and pushed out of business.

“Suddenly they introduced a new loyalty card and each week they are taking from my account $100 to $150 to make the customer happy,” the selling franchisee said.

“I can’t see the future any more.”

Franchisees also complain that it is difficult to leave Subway.

One said he was “forced out” of the franchise after he and his brother tried to sell two of the seven stores they operated.

He said he found buyers for the two stores at $1.5 million for each store but Subway head office blocked the sale.

“Subway made it very very difficult for us to sell our business,” he said. “They kept on rejecting people.”

He said the buyers walked away and both stores were re-possessed by landlords, leaving him and his brother with nothing.

“This is absolutely bullying and you have no idea how much stress we went through,” he said.

‘No apology for innovating’

Not all franchisees are unhappy with Subway with some of the franchisees interviewed by The  SundayAge and The Sun-Herald supporting the changes.

Franchisee Ria Edmonds listed her Subway store in the Melbourne suburb of Brighton for sale for $150,000 but said she is very happy.

“It’s a system that works and there is a lot of back-up with the system,” she said.

A spokesperson for Subway said it rejected any claims that franchise owners are forced to close or to refurbish their restaurants.

“Subway makes no apology for innovating to increase the profitability of franchise owners and adapting to the changing needs of Australians,” the spokesperson said.

“Refurbishment time frames and arrangements are developed in consultation with owners and are substantially less costly than other fast-food brands, with packages starting from $50,000.” 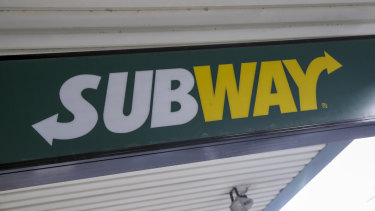 Subway denies it is reducing its store count. Credit:Wayne Taylor

Meeting for an interview at one of Subway’s refurbished stores in the shadow of Melbourne’s Southern Cross Station, Amanda Templeton, national public relations manager for Subway in Australia, was positive about the “brand transformation” Subway was undertaking.

Ms Templeton said Subway is “working closely with franchise owners” who she said supported the need for renovations.

When asked whether there was any resistance from franchisees to the changes which are “the biggest in Subway’s 30-year history in this country”, Ms Templeton said “not that I’m aware of”.

“I think you’ll find that many franchise owners are very happy to make these changes to update their restaurants because they are seeing the impact and the excitement of our guests around that,” she said.

“At the end of the day, we realise that we need to continue evolving, because Australians’ tastes are evolving.”

‘I am deeply saddened by this outcome’: Jamie Oliver’s restaurant chain goes into administration