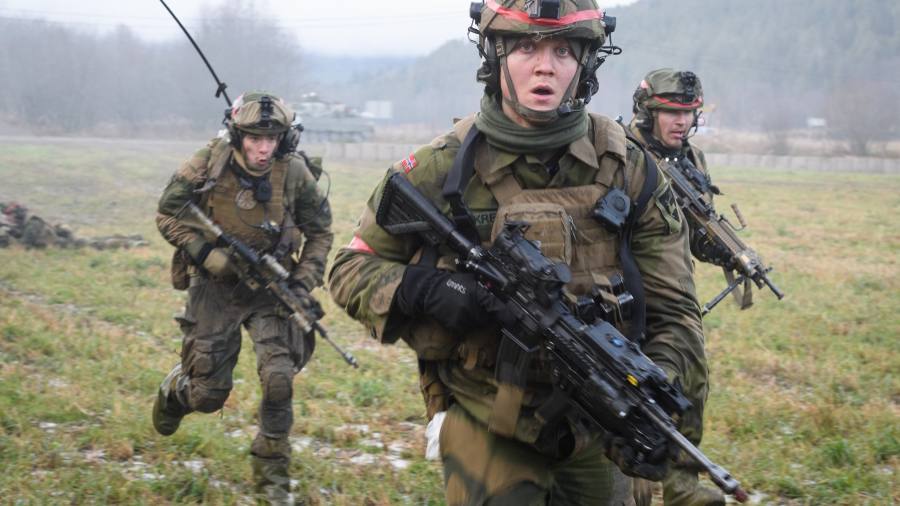 The crew of Stena Impero, the UK-flagged tanker seized last month in the Strait of Hormuz by the Iranian Revolutionary Guard, knew what to do in case pirates attacked. Being seized by another country’s armed forces is another matter.

Businesses today are a convenient target for nation-state aggression and they need to be ready for it. If the west is to protect itself against a wide range of threats, industry should prepare alongside the military.

The occasional company already participates in military exercises — but these tend to be ones already involved with the armed forces. Nato’s Trident Juncture 2018 exercise in Norway featured Norwegian transportation companies that have contracts with the country’s armed forces. Business representatives are sometimes brought in to assist with armed forces exercise scenarios — but without industry itself taking part. That is a missed opportunity, because the private sector would be greatly affected by a national security emergency.

“Exercises combining the armed forces and the private sector are not just desirable; they are absolutely vital,” says retired Major General Mats Engman of the Swedish Air Force. “Most modern societies are based on the assumption that, in a crisis, the armed forces will be supported by civil society. Such support can only work if companies have practised national security contingencies with the armed forces.”

Maj Gen Engman is the chief evaluator of Sweden’s Total Defence 2020, a resurrected and modernised version of the exercises that Sweden’s government, industry and volunteer groups perfected during the cold war.

Most large businesses already conduct crisis-management exercises, but they restrict them to their own staff, and with scenarios specific to their operations. That is limiting when national security threats affect the private sector. The genius of hybrid warfare is that it mixes military and non-military elements. In Ukraine, Russian military activities have been mixed with disinformation campaigns and cyber attacks. They have brought down banks, media outlets and government agencies.

Governments thus need the private sector to prepare for national security contingencies with their armed forces. Given that they would face devastating consequences if caught unprepared in a national security crisis, companies would benefit from participating.

Think of a conventional attack in combination with a range of hacks against companies, combined with seizures of commercial freighters, which would both disrupt vital supply chains. As Britain is currently discovering, supply chains are the lifeblood of the just-in-time economy: shuttling food, fuel, medicines and industrial components to where they are needed. Britain, for example, imports half of the food the country consumes. If one link in the chain goes down, it no longer functions.

That is true even for companies headquartered a long way from potential adversaries: imagine the consequences if, say, an internet giant server farm lost access to electricity. (Back-up generators rely on fuel, a precious commodity in a crisis.)

Having businesses tag on to military exercises to practise defence against hybrid aggression would be a novel approach, but so is hybrid warfare with its focus on non-military attacks. Rear Admiral Sverre Nordahl Engeness of the Norwegian Navy, who planned the logistics of the Trident Juncture exercise, including 50,000 troops and 10,000 vehicles, told me that involving a wider range of businesses would be relatively straightforward. “You just have to sort out the legal issues first,” he said. Those include granting access to classified information.

Many businesses might conclude that practising for national security contingencies is in their interest — but others may not. “Today many companies are foreign-owned, sometimes with spurious ownership arrangements,” Maj Gen Engman noted. “Such owners may even be based in countries that are our strategic competitors, such as Russia or China.”

That challenge could be overcome. Because participation in military exercises should, at any rate, not be open to every company, the armed forces could invite only the most relevant businesses. What’s more, the increasing threat of climate change will force both the military and industry to practice for severe disruption of daily life (through hurricanes, flooding or water scarcity), so why not practice for other threats, too?

“We were lucky,” New York governor Andrew Cuomo said last month after engineers restored power to 72,000 New Yorkers hit by a power cut. By joining the armed forces in exercising contingencies, companies would not have to rely on luck.

The writer leads the modern deterrence project at Rusi, a think-tank

Retirement Weekly: The inflation bet you’re making—even if you don’t know it