The number of properties with foreclosure filings nationwide is a mere fraction of what it was during the height of the financial crisis.

But at the local level, some markets are showing signs of weakness — and that could represent a reason for worry for homeowners or an opportunity for buyers.

During the first half of 2019, there were just under 300,000 properties with foreclosure filings, according a new report released Thursday by real-estate data firm Attom Data Solutions. These filings include default notices, scheduled auctions and bank repossessions.

At the local level, a slightly different picture emerges. In 42% of local markets, foreclosure starts increased from the same time period in 2018. Miami had the largest increase (up 32%) followed by Tampa-St. Petersburg, Fla., Atlanta, Washington, D.C., and Denver.

Attom Data Solutions has previously noted that a loosening of lending standards in recent years had led to riskier mortgages being offered. An uptick in foreclosure starts could suggest that homeowners in some parts of the country have been stretched too thin.

The rise in foreclosures has been mostly confined to southern states, suggesting that home owners there are more financially vulnerable. Alabama, for instance, has a median annual income of just $26,498 per capita. It also has higher debt upon graduation, higher rates of poverty and preventable hospital admissions, according to the U.S. News & World Report. 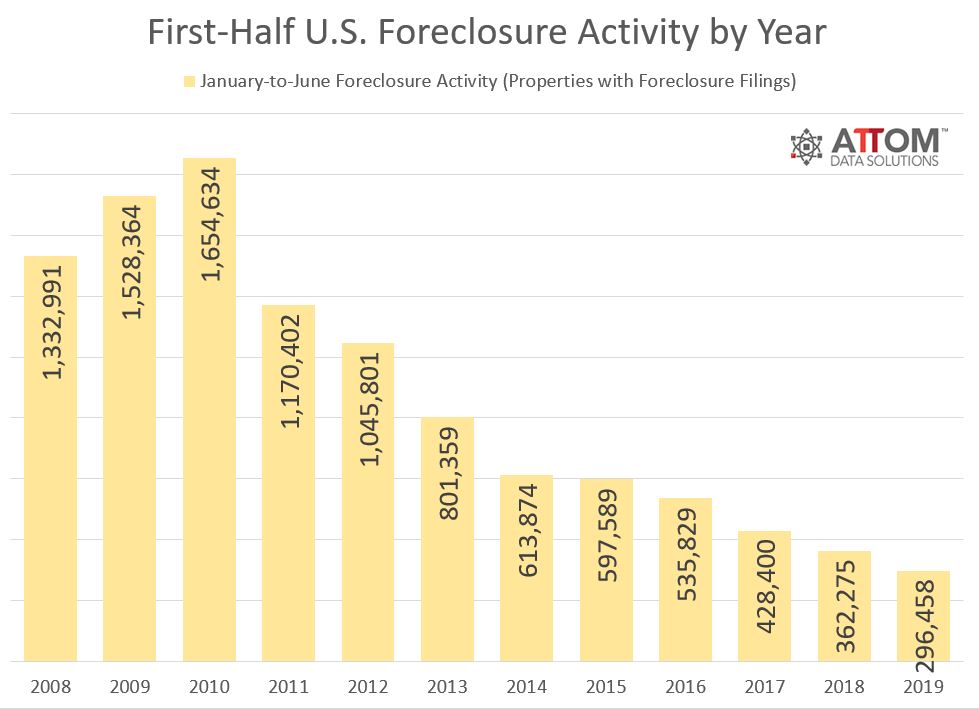 Overall, however, the number of filings has fallen 18% year-over-year and is down 82% from the peak reached back in 2010, when there were over 1.6 million properties with foreclosure filings.

Additionally, just over 177,000 properties across the U.S. began the foreclosure process during the first six months of 2019, down 8% from a year ago.

Read more: Consumer watchdog blasts government’s loan sales program — says it has ‘no rules’ in place to help people save their homes

At the same time, many buyers remain on the sidelines of the housing market because of record-high home prices.

Foreclosure activity can cause home prices to drop in local areas. If that were to occur in the markets that have seen a rise in foreclosure starts, then buyers in those cities could see an opening to buy a home at a more affordable price.

Tax Guy: How to protect your savings if you or a family member requires...