Ms Lloyd and her co-founder, Valeria Ignatieva, say their $2 million business has ridden a global wave of growth, with the United Kingdom’s focus on pay equity helping to drive traction overseas. The company’s client base has cracked 100 and includes names such as Microsoft and NAB.

Yet this latest fundraising round had a new element: Ms Lloyd was approaching investors seven months pregnant, and completed many pitches via video link. Despite her company’s focus on workplace equity, she said the process of telling current and potential investors about her pregnancy did make her nervous.

There was one guy that has a large fund. When I told him I was pregnant he leant back in his chair and his eyes went really wide.

“During my pitches I was purposefully telling them — I wanted to gauge their reaction,” she said.

While her existing investors and several new potential backers were congratulatory, not every meeting had the same warm reception.

“There was one guy that has a large fund. When I told him I was pregnant he leant back in his chair and his eyes went really wide, he looked really confused. His tone changed, it wasn’t as warm as it was before.”

That meeting did not result in investment, though Ms Lloyd said that was a positive.

“Given everything that I’m trying to drive and push, it’s of no interest to me to get in an investor that doesn’t align with those values,” she said. 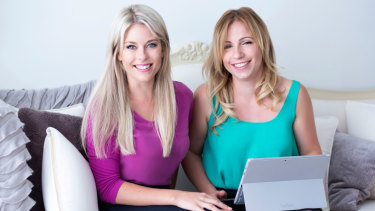 Ms Lloyd has previously spoken out about discrimination when pitching for capital, and says while her latest experience was largely positive, there’s still work to do to increase the diversity of investor teams.

The process of pitching a company focused on women to rooms dominated by men can be a challenge, she said.

“Even prior to being pregnant the experience of being a woman and raising capital is more difficult.”

The money raised will be used to hire an additional 15 staff, look to global markets including the US and double down on growth in the United Kingdom.

Ms Lloyd said the company has gained significant traction in Britain, where companies with 250 employees or more are now required to publicly report the difference in the average of male and female employee salaries.

It’s a policy that has made businesses in the region keen to show they offer equitable work places. Ms Lloyd said she’d love to see a similar policy adopted in Australia, which, she believes, would make corporations change their approach to remuneration.

“I think it would [change things], because it’s easy to hide these things. If someone makes you put that [information] public, it makes you do something about it.”

Global growth means she will soon take her newborn to the UK where she and her partner, who also works for Work180, will share childcare responsibilities while driving the business.

Emma is the small business reporter for The Age and Sydney Morning Herald based in Melbourne.