The company said at its full-year results presentation that it did not expect to repeat last year’s record profit.

“Macquarie’s annuity-style businesses were down on the prior corresponding period,” Ms Wikramanayake said.

She said the group’s funds management arm had made less profit because of the timing in the payment of performance fees, and higher operating costs; lending volumes were lower in its corporate and asset financing business; and the retail banking part of Macquarie was “broadly in line.”

In contrast, its commodities and global markets business had a strong quarter, and fee revenue was up in its investment banking unit, Macquarie Capital.

The company repeated its earlier guidance that it expected full-year profits this year to be “slightly down” on last year.

Addressing shareholders in Sydney, chairman Peter Warne acknowledged the key role of the Hayne royal commission in the banking sector over the past year, as he emphasised the importance of conduct in Macquarie. 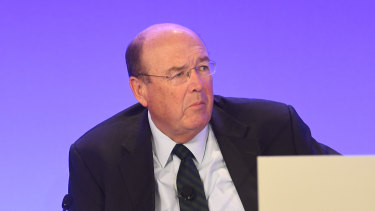 “We continue to review and monitor the outcomes and initiatives emanating from the commission as well as key learnings as we continually improve our group-wide approach to risk culture and conduct management,” Mr Warne said.

“This includes an intense focus on customer outcomes, reporting on which has now been included in the board Governance and Compliance Committee’s responsibilities.”

Macquarie has not released its “self-assessment” of governance and culture within the bank, an exercise that 36 financial institutions were required to carry out by the Australian Prudential Regulation Authority (APRA).

Mr Warne said risk management was part of Macquarie’s “DNA” and the self-assessment had been a “valuable” exercise.

“The review confirmed that these factors remain critical to our continued success and are well embedded. At the same time we have identified opportunities for us to take to further strengthen our non-financial risk management,” he said.

He said 23 of these matters resulted in staff being fired, and the remaining 140 resulted in a formal warning, and in 34 of these cases staff left after receiving the warning.

Clancy Yeates is a business reporter.

‘Betrayed’ investors in Kevin McCloud’s eco housing business told they could lose most of...