In the last year an investigation by The Age and The Sydney Morning Herald has exposed some of the industry’s biggest names as fronting businesses based on systemic wage theft.

They include Neil Perry’s Rockpool Dining Group, Heston Blumenthal’s Melbourne restaurant and the businesses of other (previously) well regarded chefs Teage Ezard and Guillaume Brahimi. The ABC has exposed others such as Shannon Bennett’s restaurant empire.

Many of these men are seriously rich with glittering media careers as the high-end food craze has turned them into celebrities from TV shows such as MasterChef.

But they represent the worst excesses of our era; a celebrity-focused, winner-takes-all culture in a time of high inequality.

The Calombaris penalty of a $200,000 fine is dismally low and a reflection of how weak our laws are. The main penalty for these rich men appears to be public shame.

They get to keep their fortunes and spend them, if they so choose, on a public relations rehabilitation.

Too often the exploited workers – many of whom are temporary migrants – get nothing or a fraction of what they are entitled to.

Serious reform is needed to our visa laws, to give temporary migrant workers far greater rights to work here. Our visa system, by design, ensures working conditions for these people are precarious.

They are often the worst exploited in Australia’s kitchens, too scared to speak up as they fear being kicked out of the country if they lose jobs which are tied to their visas.

The legal system also makes it prohibitively expensive to make claims for underpayment.

Federal Labor’s pre-election pledge of a low-cost jurisdiction for claims of up to $100,000 has serious merit.

At the same time, penalties need to be much higher while the regulator, the Fair Work Ombudsman, needs to ditch what is too often a collaborative regulatory approach. 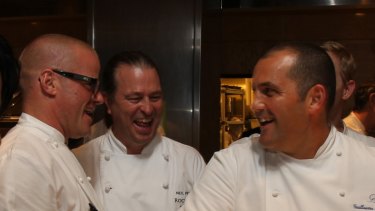 Heston Blumenthal with Neil Perry and Guillaume Brahimi. Businesses fronted by all three have been embroiled in wages scandals.Credit:Simon Alekna

In the Calombaris case, part of the deal involves him speaking to the industry about the “importance of workplace compliance”. The poacher turned gamekeeper.

Instead there needs to be serious deterrents for doing the wrong thing.

This – not targeting the misdeeds of the CFMMEU – should be the most pressing issue for workplace relations reform. It is a systemic issue hurting hundreds of thousands of workers and is contributing to the economic crunch of low wage growth.

A few years ago the idea of introducing laws to criminalise serious wage underpayment was a fringe idea at best.

Now the Victorian Labor government has said it will introduce laws while the Federal Coalition government (in what appear to be limited scenarios) offered pre-election support for criminal sanctions.

Considering the endemic wage theft in industries such as hospitality, horticulture and franchising, it is hard now to make a case against that.

Do you know more? Contact us securely via Journotips

Ben Schneiders is an investigations reporter at The Age with a background reporting on industrial relations, business, politics and social issues. A two-time Walkley Award winner, he has been part of The Age’s investigative unit since 2015.