The contrast between what’s already occurred and is now expected and the record levels of the US sharemarket, however, underscores how little that the underlying condition of US companies has had to do with the market’s near 20 per cent surge since the start of the year.

That push back to record levels after a brutal final quarter of 2018 reflects the evolution of the US Federal Reserve Board’s members from hawks last year, to a more passive “patient” mindset at the start of this year and, more recently, to doves foreshadowing an imminent rate cut. 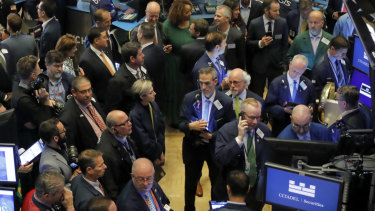 There’s an odd contrast between forecasts of an earnings recession and the record levels of the US sharemarket.Credit:AP

It is the Fed, and the expectation that US rates will start falling again, that is underpinning the market, rather than the fundamentals of corporate performance.

If that rate cut doesn’t eventuate at the next Fed Open Market Committee meeting at the end of the month – and recent positive employment and inflation data might still give the Fed pause for thought – it won’t matter how good, or poor, the earnings season might be.

There would almost certainly be a sell-off with flow-on effects to other equity markets.

While the US market did edge up on Monday, there was a cautious tone to the trading. That’s despite a respectable result, slightly ahead of expectations, from the first of the big US banks to report.

Citigroup comfortably beat analysts’ forecasts with a seven per cent gain in earnings but the result did include a gain from an investment in a trading platform and the market appeared more focused on weak trading revenues and pressure on its net interest margins than on the bottom line.

A better picture of the key big bank performance will come on Tuesday in the US, with JP Morgan Chase, Wells Fargo and Goldman Sachs to report. By the end of the week nearly 840 companies will have released their earnings, with nearly 2400 scheduled for next week.

There will be a particular focus on those companies directly or indirectly exposed to the US trade war with China.

With the US raising the rate of the tariffs on $US250 billion of China’s exports in May, those companies would now be starting to feel the effects of the higher prices from the tariffs and the disruptions to global supply chains as they, or their suppliers, try to absorb them or pass the costs on to customers.

The performance of the technology companies will also be closely scrutinised. It is a sector expected to perform particularly poorly. Higher labour costs in a tight and competitive employment market and exposures to the trade war and a slowing global economy could unravel what are very ambitious price-earnings multiples.

The really big tech companies that have helped power the market to record levels – giants like Facebook, Google, Apple and Amazon – are also facing higher regulatory costs and ad hoc tax increases around the world. Apple is also being impacted by the tensions between the US and China.

The awkward juxtaposition of weak corporate earnings amid a weak and fragile global environment and a record sharemarket looks even stranger when one considers that, around the world, about 25 per cent of the global bonds on issue – including billions of dollars of high-yield, or “junk” bonds – have negative yields.

That’s a sign that (a) bond investors are a lot more pessimistic about the outlook than equity investors and (b) they expect central banks to push interest rates a lot lower, or in the case of Europe even deeper into negative territory.

Rationalising record or near-record levels for sharemarkets on the basis that there’s no alternative that produces a semi-reasonable return – the major influence on equity markets since the financial crisis caused the major central banks to embrace unconventional monetary policies – is ultimately an unsustainable proposition, even though it has already been sustained for more than a decade.

If US corporate earnings outperform expectations; if the trade stand-off with China is resolved without further friction; if Donald Trump can restrain himself and his trade hawks from expanding their trade war to the Eurozone and elsewhere; and if the Fed remains dovish even as the threats to US growth diminish, the fundamentals of US corporate performance might catch up with the valuations.

If none of those things eventuate the global economy, already slowing, will again be on the verge of recession and the big central banks will again push deep into unconventional policies, giving investors everywhere few options but, perversely, to continue holding equities. It’s a weird, weird world that we, and our markets and economy, are hostages to.

Millennials are coping with death on $600 ‘grief retreats’ where they dance, meditate and...