That climb earned itself a nickname, the TINA market. It stands for There Is No Alternative, which simply means that because central banks around the world were holding rates so low, investors had little choice but to buy American stocks.

Lower interest rates made returns on government bonds around the world less appealing and drove investors to seek returns in the stock market. At the same time, the US economy was performing better than much of the rest of the world, and US stocks were seen as less speculative bets than those in other countries. These are more or less the same circumstances investors face today.

Here’s a look at why the return of the TINA market could keep the bull market going, and what could be different in 2019.

Any of the following could arguably derail the decadelong economic expansion and the rally: the seemingly never-ending trade war between China and the United States, a slowing global economy and simmering geopolitical tensions that could escalate into a full-blown conflict.

A recession would wreak havoc on corporate profits and would cause investors to flee riskier assets such as stocks.

But a downturn in the United States is not imminent — employment and economic data make that clear. Investors have become convinced that the Fed will act aggressively to lower rates to keep the expansion going. In the futures market that investors use to bet on the Fed’s decisions, nearly 90 per cent expect at least two rate cuts by the end of 2019, and 53 per cent anticipate at least three.

That signalled an abrupt U-turn for Fed policymakers, whose seeming determination to continue raising rates caused a market meltdown at the end of last year.

It’s good news that investors are not particularly optimistic

The decade-long bull market has racked up record highs and broken through one milestone after another. Each instance has been met with scepticism. And that does not seem to have changed this year. 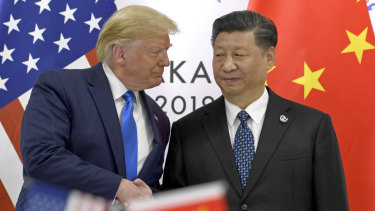 The ongoing trade war is keeping investors on edge.Credit:AP

The percentage of individual investors who say they expect American stocks to rise over the next six months has remained below its historical average for nine straight weeks, according to the American Association of Individual Investors’ weekly survey.

Bank of America Merrill Lynch called its June survey of fund managers its most bearish since the financial crisis.

The rates on long-term government bonds have declined this year, as well as the expectations of bond investors for inflation over the next five years. That indicates there is significant concern about the strength of the economy in the coming years.

“You are not seeing the party hats going on the floor of the New York Stock Exchange,” said JC O’Hara, the chief market technician at MKM Partners. “The average investor has a healthy degree of skepticism. They are very aware of the signs that an economic slowdown is taking place. But in a TINA market, where are they going to put their money?”

The lack of exuberance surrounding the rally may be a reason to think it can keep going. Investor sentiment is often viewed as a contrarian indicator: When optimism is high, it can indicate that investors are ignoring risks and plowing money into stocks on the belief they can only go up. Conversely, if investors become too pessimistic, it can indicate the market has hit a bottom.

Right now, investors are more neutral. That means a rate cut, along with better than expected corporate results and economic data, could inspire the skeptics to buy and keep the rally going.

“The market continues to believe we have this ‘Goldilocks’ situation. That stocks can continue to make new highs and a lot of assets can all perform well together,” said Andrew Sheets, a strategist at Morgan Stanley. “But there are a number of reasons we believe that this is not 2013 or 2015 or even the late 1990s, another period when the Fed cut and the markets did quite well.”

For one, Wall Street’s expectations for earnings remain too high, Sheets said.

When companies reported first-quarter results, they seemed reluctant to lower the financial forecasts for the year ahead. But since then, trade talks aimed at reaching a deal between China and the United States, which many believed was imminent as recently as the end of April, have broken down, and the economic data has weakened. That means that when companies start reporting second-quarter results, they are likely to issue forecasts that reflect a more difficult 12 months ahead, Sheets said.

Also, a number of economic measures looked more stretched than they did five years ago when the labor market was still strengthening and consumer confidence was improving, Sheets said.

It’s true that the US economy is still adding jobs, but at a slower pace than it did last year or even earlier this year, and consumer confidence is high but not improving. 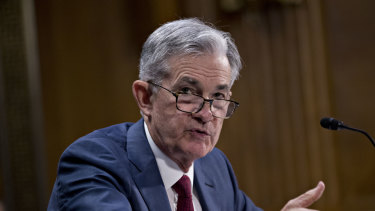 The Fed chief signalled a rate cut is on the cards.Credit:Bloomberg

Even if this is the return of the TINA market, how long can the run continue?

Sheets is not expecting a sharp downturn. After stocks have gained 19 per cent this year, he and his colleagues at Morgan Stanley, are skeptical the market can continue to march higher.

But in a market that has primarily been fuelled by the prospect for interest rate cuts, there is good news for investors: When the Fed starts cutting rates, stocks typically rally for the year that follows.

“If you look at all the initial rate cuts since 1954, they have tended to push the markets higher over the next 12 months,” said Audrey Kaplan, the head of global equity strategy at the Wells Fargo Investment Institute.

According to her research, the S&P 500 gained about 14 per cent on average the year after the Fed’s first cut. The gains have come in 13 out of the 16 instances.

Investors have spent much of the past decade counting on the Fed to keep the bull market going, and the central bank has delivered what investors hoped for. What investors have to grapple with now, is how long this will continue.

“This has been called the most unloved bull market in history, but it will be the most highly anticipated bear market whenever the next one comes around,” O’Hara said. “Whether that is today, tomorrow, a month from now or a year, that is the question right now.”

Tax Guy: How to protect your savings if you or a family member requires...