They won the World Cup on Sunday, and now it’s time for the U.S. women’s soccer team to score some serious endorsements.

Indeed, many players on the U.S. Women’s National Team have already been bridging the widely reported gender pay gap in soccer via sponsorship deals.

And sports agents and marketing experts tell MarketWatch that now’s the time for these women to explore whatever endorsement deals, speaking engagements and social-media campaigns come their way. They need these deals to secure their financial futures while waging a pay-equity battle against the U.S. Soccer Federation, claiming that they earn just 38 cents on the dollar compared with the men’s team.

“These women are the best at their sport in the world, not once but twice with World Cup victories in 2015 and 2019,” said Andrew Lafiosca of Nielsen Sports Americas. “There is a commercial opportunity for each player now, whether it’s through camps and clinics, speaking appearances or  endorsements, because their story is simply amazing and there are a lot of people that want to hear it.” (The U.S. team also won Women’s World Cup trophies in 1991 and 1999.)

Molly Fletcher, one of the first female sports agents, told MarketWatch that the U.S. players’ agents were probably already wheeling and dealing before the World Cup tournament even started.

“We live in a world of ‘What have you done for me lately?’ So you want to be ready the moment that that win happens,” said Fletcher, who has represented pro golfer Matt Kuchar, former major-league pitcher John Smoltz and Fox’s Erin Andrews. “A good agent would have been way out ahead of this with a branding plan anticipating this [victory], and how to leverage [new] endorsement deals and to capitalize on the ones you have now.”

So what has becoming World Cup champs won them in terms of bonuses and marketability?

It’s difficult to determine just how much each player is taking home, since some payments are not disclosed, and different players get different salaries and bonuses from their various leagues and sponsors.

But each player is awarded about $250,000 in qualifying, roster and victory bonuses, the New York Times reported. On top of that, once Luna Bar learned that the Women’s World Cup roster bonus is $31,250 less than the men’s, the brand donated the difference to each USWNT player. And National Women’s Soccer League bonuses increased 5% this year to max out at $46,200. Money.com projected that the top players — household names like Morgan, Megan Rapinoe and Julie Ertz — could earn more $400,000 overall this year when combining salaries and bonuses, before factoring in endorsements.

As for those lucrative sponsorships, Stacy Jones, CEO of the marketing agency Hollywood Branded, told MarketWatch that social-media campaigns could earn star players anywhere from $25,000 to $250,000.

“Alex Morgan is a social-media queen; she has 8.1 million Instagram followers. She is truly a social-media influencer,” said Jones. “And I think where we’re going to see a lot of the money that these women make, and the ways that they can leverage their brands, is through their social accounts.”

Jones explained that her company works off a CPM, or cost per thousand, for Instagram FB, +1.76% campaigns. “Alex has 8.1 million followers, so she’s realistically looking at anywhere from $5 to $10 per CPM, so she would get paid possibly between $40,000 and $80,000 per social post on the low end, depending on what you asked her to do [whether that’s a single photo, a video or a series],” said Jones. “Let’s say we’re looking at Megan Rapinoe and her 1.4 million followers; she’s getting $7,500 to $15,000 for a social post. But because of their celebrity status, it may even be higher.”

And the star players stand to land more lucrative deals than many of defensive players and alternates who weren’t making headlines for sparring with President Trump as Rapinoe did, or scoring game-winning goals like Rose Lavelle’s rocket against the Netherlands that helped clinched the American win on Sunday in Lyon.

“If you’re not a household name, you’re going to be more vigilant in the team’s legal fight [for pay parity], you’re gonna be outspoken, or at least behind-the-scenes be assertive, with this equal pay within the U.S. Soccer Federation,” said Patrick Rishe, president of Sportsimpacts and director of the sports business program at Washington University in St. Louis. “That’s your best shot at really improving on your own personal circumstances.”

Or the lesser-known players can look for local marketing opportunities in their hometowns, or connect themselves with players like Rapinoe and Morgan in campaigns like the Hulu live sports video ad, or group trips like Wednesday’s victory parade in Manhattan. 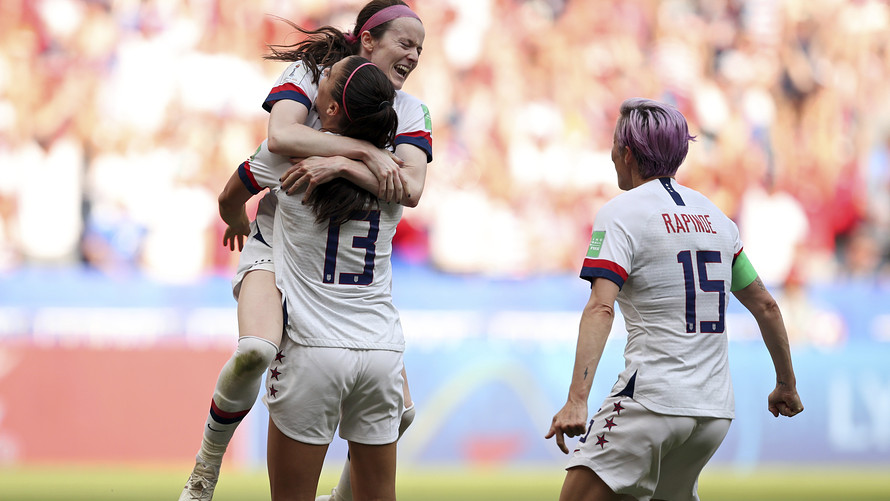 Rose Lavelle celebrates with Alex Morgan, wearing No. 13, and Megan Rapinoe, No. 15, after scoring the second U.S. goal in Sunday’s final.

Players can also go the speaking- and appearance-fee route, which Jones says can bring in “tens of thousands to hundreds of thousands of dollars.” Indeed, the All American Speakers Bureau lists retired U.S. players Mia Hamm and Abby Wamback, who both won two Olympic gold medals and two World Cups in their careers, as commanding $50,000 to $100,000 for speaking engagements. The Washington Speakers Bureau features current player Kelley O’Hara at a rate of $25,000 to $40,000 — for now.

But there can also be a gender gap in the potential income from these deals, as well. “The size of one’s endorsement income is a function of one’s marketability and visibility,” explained Rishe. “While it is certainly possible that a very few select individual female soccer players could earn $5 [million] to $10 million in endorsement income (with Alex Morgan and Megan Rapinoe being near the top of that list right now), the reality is that [male international soccer stars] Cristiano Rinaldo ($44 million last year) and Lionel Messi ($35 million last year) have a much higher endorsement income ceiling, because there are many more consumer eyeballs on their sport than there is for the women’s game.” 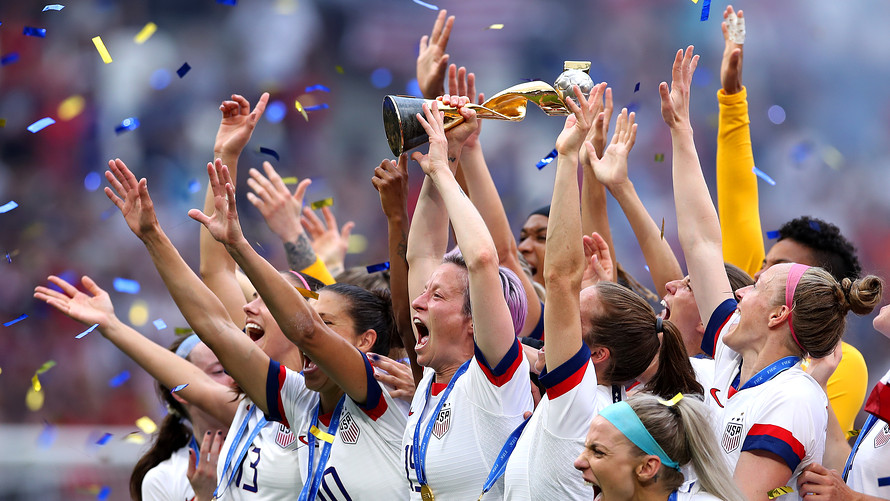 The team celebrates the Sunday win.

That’s because, while the women’s final was watched by audiences on par with the men’s tournament, the men’s World Cup makes more money globally. The FIFA Women’s World Cup final was watched by 15.6 million people on Sunday, according to Nielsen data reported by the Los Angeles Times — which beats the 12.4 million who tuned in to watch the 2018 Men’s World Cup final between France and Croatia. And Goal.com estimates that 850 million viewers across all platforms watched the U.S. women’s win on Sunday, and the total audience could exceed 1 billion. But while the previous Women’s World Cup in Canada in 2015 made $73 million in revenue, Forbes reported, that’s a fraction of the $6 billion banked during the 2018 men’s World Cup in Russia.

Even compared with other women’s sports, however, the soccer team’s endorsement packages often lag behind. “Female tennis players at the very top over the last decade (including both Williams sisters and Maria Sharapova before her suspension a few years back) were commanding between $12 [million and] $25 million annually from endorsements,” said Rishe. “These are in part because individual-sport athletes (both men and women) tend to do better than most team-sports athletes in endorsements, in part because they are the team. Thus, when they compete, all the attention is on them.”