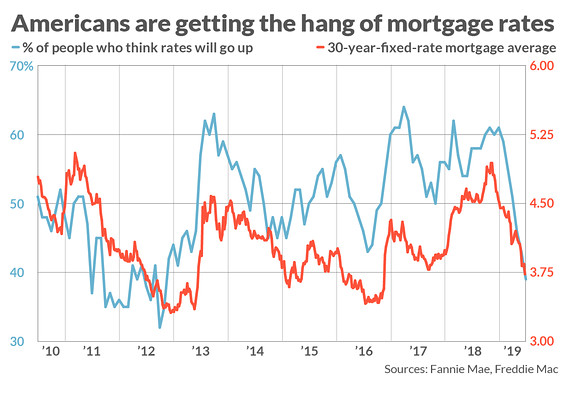 If you’ve ever locked in a mortgage rate only to watch borrowing costs drop even more, you know how frustrating it can be to try to predict what markets will do and when, exactly, they’ll do it.

But it looks like Americans as a group may be getting better at these predictions.

Every month, mortgage liquidity provider Fannie Mae conducts a survey of households, which asks whether people expect mortgage rates to go up or down.

When nine years of survey data are plotted against actual mortgage rate movements, it’s striking: Americans’ expectations of rates have moved pretty closely with the markets since about 2013.

Of course, that insight doesn’t help much with the immediate question home buyers may have around this huge financial decision: Is it a good time to refinance? Give it a few weeks or lock in now?

And notably, “Will rates go up?” is much broader question than “What will rates be?” at a future point in time.

Still, the track record is a bit better than the forecasts from “expert” economists and housing-market trackers. As a reminder, that group, as surveyed by MarketWatch last December, forecast that the 30-year fixed-rate mortgage would finally “lift off,” and average about 5.1% throughout 2019. So far this year, it has actually averaged 4.18%, down about 40 basis points from last year. Down, not up.

Read: Here’s what mortgage rates will do next year, from the people who usually get it wrong