Amazon’s activities in the retail sector are perhaps the most recognised, and the most criticised. However, in a letter to shareholders in April, Bezos even said that Amazon was still “a small player in global retail”.

Retail sales at Amazon have risen from $US51 billion to $US59.7 billion in the first quarter of 2019. However, growth has slowed dramatically. In North America, revenues increased 17 per cent compared to 46 per cent in 2018, with international growth dropping to 9 per cent from 34 per cent.

But there are problems brewing across the pond. A federal court ruling on Thursday that Amazon can be held liable for a dog collar sold on its website that partly blinded a woman could complicate the online merchant’s business if it is applied broadly.

More than half the items sold on the popular site come from independent merchants. Amazon takes a commission on sales and charges additional fees for storing products in its warehouses, packaging them and delivering them.

But it technically doesn’t own the inventory, a fact it has used to protect itself from product liability cases. Closer to home, a report by consumer group Which? found that unscrupulous sellers are beating Amazon’s security systems with tactics such as bribery and hacking to post fake reviews for their products.

Amazon has always had a vision way beyond any reality that their customers experience in the now.

The watchdog said features designed to make the online giant’s website more user-friendly were being “abused on a grand scale” to mislead customers.

These challenges haven’t stopped Bezos from innovating and making aggressive acquisitions such as the $US13.7 billion purchase of Whole Foods in 2017 – but whether his approach will pay off remains to be seen.

“There are two types of retailers in the world today. Those which will be replaced by Amazon, and those which won’t,” says Ivan Mazour, chief executive and founder of AI-powered customer marketing platform Ometria.

“Amazon’s all-encompassing vision will provide us with all of our ‘needs’. But our ‘wants’ will continue to be satisfied by innovative ‘direct to consumer’ brands.”

While Amazon certainly will have its eyes on the future of retail, its cloud computing platform Amazon Web Services (AWS) is now its most profitable business. Launched in 2002, AWS has quietly established itself as one of the most prominent technology platforms in the world and is on track to earn $US31 billion in revenue this year.

Essentially selling cloud computing and storage as a service, AWS is used by 5,000 government organisations worldwide, institutions such as NASA and huge companies like Uber and Netflix.

AWS currently commands a 32 per cent share of the cloud service market, far ahead of closest competitor Microsoft at 16 per cent. And its revenue grew 41 per cent for the first three months of 2019. Although that is a dip from 2018’s 49 per cent increase.

Both Microsoft and Google are placing more emphasis on their cloud services, from video game streaming to connecting machines around the world. But while this new focus will be a threat, Amazon is already entrenched.

“Microsoft is probably the biggest threat to Amazon in the cloud market,” says Halliwell. “But across the spread of industries that Amazon operates in, it will take a number of partners or a conglomerate working collaboratively to overthrow their dominance.” 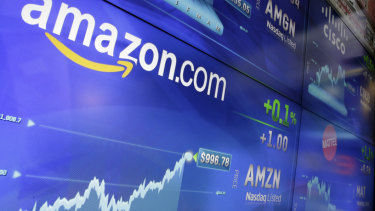 Possibly the greatest threat to Amazon in the coming years is antitrust laws, competition commissions and even consumers suffering from “Amazon fatigue” deciding enough is enough.

“How long will we, the public, allow it to grow and extend its monopoly?” asks Halliwell.

“How long will the Competition Commission and Federal Trade Commission allow Amazon to extend its monopoly?

“We’ve recently seen changes in Federal attitude to the big tech firms. I think we’ll see this play out very quick in the run-up to the US elections.”

Indeed, Democratic presidential candidate Elizabeth Warren has called for a break-up of big tech, which could more formally separate AWS from the Amazon mother ship and unwind significant mergers such as the one with Whole Foods.

The company also continues to face scrutiny over work conditions in warehouses and the company’s tax contributions.

The US government is gearing up for a major probe into big tech, which could lead to a significant break-up and one that Amazon will be looking to prepare for.

“I think this is highly likely,” says Halliwell. “If they’re smart they are already thinking about how to do this proactively to prevent regulatory intervention.”

Mazour, however, is not so sure. “Out of all the tech giants, Amazon is the one which has the lowest risk of being broken up,” he says.

“It has competed fairly at all times, and won through effective execution rather than by blocking others.”

Regardless of government intervention, Bezos’s observation that even Amazon is at risk in the long term means that the company will need to focus on other growth areas to preserve its momentum.

“I would argue that eCommerce, Cloud and AI are its more mature industries and not its key growth areas,” says Halliwell.

“Amazon will also see significant growth in its supply chain and logistics businesses over the next three years.” 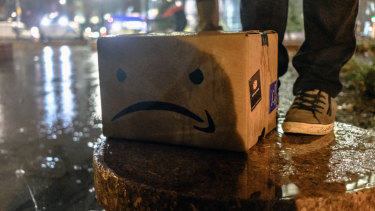 Some big challenges are ahead for the retail giant. Credit:Bloomberg

That has been the key to Amazon’s success in the last 25 years. Ever since it began life as a Seattle garage bookstore, it has looked to expand and explore, interlinking its businesses with its deep engineering and technical capability.

This has given in the agility to move into adjacent industries quickly and with success. And it seems unlikely to stop any time soon.

“Jeff Bezos said that he spends most of his time thinking a minimum of three years out. That’s likely an understatement,” says Mazour. “Amazon has always had a vision way beyond any reality that their customers experience in the now.

“Where it goes next, whether that’s drone-based deliveries from floating warehouses, physical stores with no need for tills or shop assistants, or fully-automated smart homes which predict and order what you need without you even asking, we don’t know. But I bet Bezos does.

“High though it sounds already, the trillion-dollar valuation that Amazon commands is just the beginning.”

PR pariah: How ANZ’s CEO Shayne Elliott shot himself in the foot

There’s been a surge in the number of young Americans opening credit cards —...