The fund managers who wrote to Reserve Bank of Australia governor Philip Lowe in 2016 urging him not to cut interest rates still stand by their argument, and say low rates are enabling the free-wheeling disruption of decent businesses by upstarts that aren’t held to the same standards of profitability.

Investors Mutual’s Anton Tagliaferro and Hugh Giddy implored the then incoming governor to resist joining other advanced economies in the race to the bottom on rates. They asserted that such a policy response rewards excessive borrowing and fails to foster investment.

They also claimed low rates are simply unfair. As of Tuesday, the Australian cash rate is at a record low 1 per cent and the Reserve Bank has agreed it could keep cutting “if needed”. 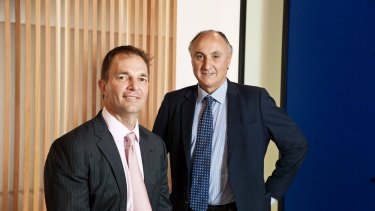 Anton Tagliaferro, right, and Hugh Giddy left of Investors Mutual urged the RBA to not race to the bottom in 2016.Credit:Ryan Stuart

Good morning and welcome to Markets Live for Friday.

Your editor today is William McInnes.

It was pretty quiet overnight with Wall Street closed for the July 4 holiday but locally we could retest our new 11.5 year high.

This blog is not intended as investment advice.

The most egregious twist in the ‘Game of Thrones’ finale: Two plastic water bottles