The move drew criticism back home, where many members of Congress agreed with the administration’s assessment that Huawei is a threat to national security and don’t want the company treated as a bargaining chip. The Commerce Department in May moved to place Huawei on a blacklist that would cut it off from American suppliers.

US officials have alleged the company’s products could be utilised for espionage by Beijing, a claim Huawei denies.

“If President Trump has agreed to reverse recent sanctions against #Huawei he has made a catastrophic mistake,” Senator Marco Rubio, a Florida Republican, said in a tweet.

In addition to agreeing to re-start talks, Trump said Xi had also agreed that China would buy large amounts of US agricultural goods. But Chinese official media reports said only that Trump hopes China will import more American goods as part of the trade-war truce.

Trump offered no further visibility into his agreement with Xi during both a scheduled meeting on Sunday with South Korean President Moon Jae-in and a surprise summit with North Korean leader Kim Jong Un at the Demilitarised Zone dividing the Korean Peninsula. 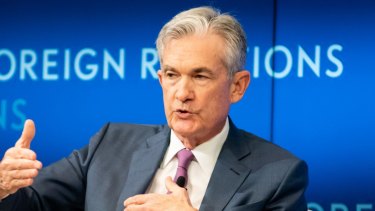 Trump has been a vocal critic of Fed chief Jerome Powell.Credit:Cate Dingley

“We are where we are,” he said at a news conference with Moon when asked about China. “We’re collecting 25 per cent on $US250 billion, and China is paying for it, as you know, because, as you notice, our inflation hasn’t gone up.”

The president has repeatedly insisted that China bears the cost of the tariffs he’s imposed on its exports to the US, rejecting the consensus of economists that the taxes are paid by American companies and consumers in the form of higher prices.

“China has devalued their currency in order to pay for the tariffs,” he said. The yuan has declined against the dollar in the last year, helping offset some of the impact of Trump’s tariffs, but Chinese officials have said the devaluation is the result of market forces.

The US Treasury Department under Trump has refrained from accusing China of artificially manipulating its currency.

Trump frequently complains about the Federal Reserve and its chairman he appointed, Jerome Powell, for raising interest rates in 2018. The central bank indicated after policy meetings earlier this month that it may consider reducing rates later this year if the economy softens.

“We’re not playing on a fair field,” Trump said.

Carrefour moves to quit China with deal to offload most of business – Financial...

We turned our side project into a £60,000 business while still working full time...