But it’s also taking a toll on men as the pressure on fathers to juggle work and care responsibilities intensifies.

Young Australian dads are now caught between two powerful but conflicting demands: to be a traditional breadwinner and a deeply involved parent.

Surveys of time use show fathers are spending more time on parenting and childcare than in the past. And it’s much more than just hanging out with the kids – men are doing a bigger share of the routine work of care such as pick-ups, drop-offs, feeding and bathing.

What hasn’t changed is the amount of paid work dads do. Analysis of the time use of fathers published by the Australian Institute of Family Studies in May found the number of hours they spend in employment “remains at the same level before and after having children”. (It’s a different story for new mothers. For them, employment is at its lowest when they have a child under the age of one year, and then rises slowly.)

The growing prevalence of dual-worker households means many fathers are required to do more childcare irrespective of their hours of paid work. 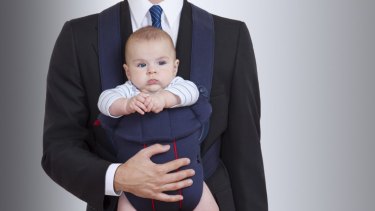 Fathers are doing a bigger share of the routine work of care like pick-ups, drop-offs, feeding and bathing.Credit:

The vast majority of Australian fathers work full-time and often put in very long hours so the additional time dads are spending with kids is being squeezed in when they are not at work.

A study of contemporary fatherhood in Australia published recently by academics Laetitia Coles, Belinda Hewitt and Bill Martin evaluated the time use of more than 3000 Australian fathers with children aged under 15 and found those in the sample worked an average of 47.62 hours each week.

A sizable share of those fathers worked full-time but also spent 20 hours or more a week with their children.

Many younger fathers spent very long hours at work and providing care because they were “more likely to have younger children who require intensive amounts of childcare, and also to be at a stage in their career that requires them to engage in longer hours of paid work”.

Dads don’t get that much attention in Australia’s political debates. But the fe

w policies that are in place to help them aren’t working that well.

The use of parental leave by fathers in Australia is very low by global standards. A 2014 study by the Human Rights Commission found almost nine out of 10 new fathers took less than four weeks parental leave.

One factor is the glaring lack of government support for new dads. A federal leave scheme for new fathers called “dad and partner pay” offers a paltry two weeks of leave paid at the national minimum wage.

Last financial year only about one in four fathers bothered to claim it after the birth of a child, according to data published by the Department of Social Services.

One reason for the low take-up is that the scheme, introduced seven years ago, is not nearly as well known as parental leave for mothers. The low pay rate means most households will lose income if the father takes up the government’s offer. For many it is just not worth their while.

The tokenistic “dad and partner pay” scheme assumes fathers have a limited role in caring for very young children. It is typical of the stereotypes that shape our workplaces.

Many employers are still reluctant to acknowledge that dads need time off work to care for children and stigmas are attached to fathers working more flexibly.

Research shows fathers in many occupations are conscious of a bias around taking extended leave, especially when they are unable to see many of their male colleagues taking leave. The enduring strength of traditional gender roles, such as the male breadwinner model, is a factor here.

For the past decade workers have been legally entitled to request a reduction in work hours to assist with the care of children. But fathers rarely do this. They are more likely to opt for flexible work, such as an early finish or working-from-home arrangements, rather than reduce hours of work to fit around childcare.

A review of work and care polices published this year by The Work and Family Roundtable, a group of academic experts, said many fathers are still reluctant to ask for parental leave or more flexible work arrangements.

“Too many new fathers continue to report their workplaces are not supportive of their use of parental leave and they fear it will undermine their career advancement.”

The Workplace Gender Equality Agency says fewer than two in 100 employers have set specific targets for men to engage in more flexible work.

The demands on Aussie dads have changed and its time governments and workplaces took that more seriously.

Matt Wade is a senior economics writer at The Sydney Morning Herald.