Investors are worried and frustrated that management may have missed the M&A boat, said Geetha Ranganathan, a Bloomberg Intelligence analyst. “Time and options seem to be running out.”

Lions Gate shares fell as much as 5.3 per cent Monday to a seven-year low of $US11.38 in New York. The company declined to comment.

The studio was formed in 1997 in Vancouver by movie-loving mining financier Frank Giustra. It made its name distributing R-rated movies like American Psycho and, with the acquisition of Summit Entertainment in 2012, was propelled into the big leagues by the teen-vampire Twilight film saga. That same year it also launched the The Hunger Games’ franchise. (The studio announced last week there might be a prequel.)

But as a smaller company, Lions Gate has long been a target of merger speculation. Companies from Metro-Goldwyn-Mayer to Sony to CBS have been linked to potential deals. Two years ago, Lions Gate walked away from talks with game-maker Hasbro involving a $US41 a share offer, worth almost $US9 billion, people familiar with the situation said.

Today, the stock trades at around $US12, weighed down by two years of declining revenue in its motion picture division, and merger talks have picked up again. Lions Gate has held informal discussions in the past year with companies that may be interested in buying the whole business, people with knowledge of the situation said. But with the stock at seven-year lows, the studio isn’t interested in selling itself at the moment, people close to the situation said. 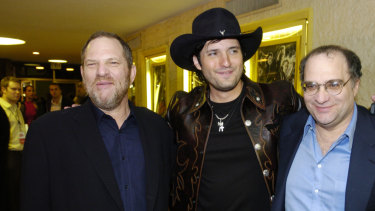 The studio has discussed buying a stake in Miramax, the film producer formerly owned by Harvey (left) and Bob (right) Weinstein.Credit:AP

A handful of other strategies are under discussion. One is to buy a stake in Miramax, the film producer formerly owned by the Weinstein brothers, one of the people said. Its current owner, BeIn Media Group, has recently sought buyers for a minority stake. Such a move would give Lions Gate access to a library of Oscar-winning movies such as Shakespeare in Love and, more recently, revived franchises like Halloween.

The company is also considering selling the studio’s pay-cable network Starz, which contributes more than half its profits. Lions Gate last month turned down a $US5 billion informal bid from CBS for Starz, but a sale remains a possibility, according to people familiar with the situation. If that happens, industry sources say, a slimmed-down Lions Gate might become more attractive to potential bidders. Others suggest the studio would be a tough sell without Starz.

Meanwhile, the studio is looking to raise perhaps several hundred million dollars from investors to expand Starz internationally. That effort will be slowed down by upcoming negotiations with AT&T’s DirecTV over fees to carry the channel.

If you are a smaller studio and you do not own Marvel, what are you going to do?

At recent stock prices, Lions Gate is valued at less than the sum of its parts, according to Tim Nollen, a Macquarie Capital analyst. Shares could be worth $US21 in a breakup, with a $US5 billion valuation for Starz, $US1.5 billion for the motion picture unit and $US1 billion for the TV segment.

For investors such as cable magnate John Malone, who first bought shares in 2015 at around $US30, it’s a rare miss. He controls about 8 per cent of Class A shares. Hedge fund manager Mark Rachesky, Lions Gate’s chairman, is the biggest investor with a 19 per cent Class A stake. He has owned shares since 2004 and backed the studio in fighting off a takeover by Carl Icahn in 2010. 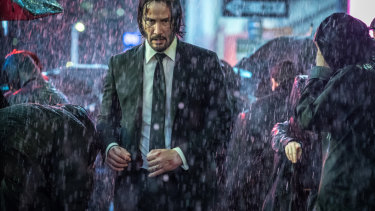 John Wick: Chapter 3 Parabellum has been a hit for the company this year.

Trends sweeping Hollywood will only make it more difficult for Lions Gate to remain independent. The merging of Disney and Fox’s film companies, and AT&T and Time Warner, along with Comcast’s Universal Pictures, has created a trio of studios that own and produce well-known blockbuster movie franchises, such as the Marvel superhero universe and DC Comics. The result is a small group of big films increasingly dominating the box office.

Moreover, buyers for Lions Gate’s typically mid-budget fare may be shrinking. Disney and WarnerMedia are investing billions in making their own shows to lure subscribers to new streaming services. Netflix Inc., too, is producing more and more of its original content in-house, a big change from the early days when Lions Gate’s Orange Is the New Black helped make the streaming channel required viewing. That trend could lessen demand for TV programs and films made by independent studios.

Lions Gate has had some successes lately. John Wick: Chapter 3–Parabellum helped lift it to fourth in the box office this year, ahead of competitors like Viacom’s Paramount Pictures and Sony Pictures. And the studio is still finding buyers for its shows, recently selling to HBO, NBC and even streaming platforms run by WarnerMedia and Apple.

Jim Gianopulos, chief executive officer of one of the smaller shops, Paramount Studios, said that appealing programming will ultimately win out regardless of production size. “Scale has its virtues, but the creative process is independent of it,” Gianopulos said in an interview.

But some analysts aren’t so confident.

“For the longest time, people thought the studios would come out as the winners because they own the content,” Ranganathan said. But in the wake of the mergers, “You need established franchises. If you don’t have scale, you can’t compete.”

Desperate to be ethical? Try the B Corporation seal of approval – The Times

So You Started A Business. Now Can You Lead It? – Forbes