That’s a huge increase from Slack’s last private funding round in August, which valued the company at $US7.1 billion. Thursday’s debut makes Slack the second-most valuable technology company to reach U.S. markets this year, topped only by Uber’s $US75 billion value and bypassing Lyft at $US18 billion.

A parallel for this unusual type of stock listing is Spotify. The music-streaming provider went public using a similar manoeuvre last year, the last high-profile company to do so. Spotify’s stock is up 14 per cent from its reference price since then.

Goldman Sachs Morgan Stanley and Allen & Co. advised Slack on the listing, the same trio of banks that lined up when Spotify went public.

Butterfield said Thursday that the company chose not to have a traditional IPO for a pragmatic reason: It didn’t need the cash. “We’re not ideological crusaders on this stuff,” he said. The direct listing process is a more efficient way to price a stock, he said, “but I don’t think anything comes close to not having to dilute existing shareholders by 10 per cent.”

The 46-year-old chairman and chief executive officer has come a long way from the log cabin where he lived without electricity and running water for the first few years of his life. He was introduced to computers in the second grade but lost interest in the technology as he got older and went on to study philosophy in college. 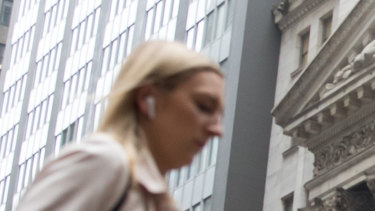 Slack had a day one to remember on Wall Street.Credit:Bloomberg

“By the time I finished my master’s degree I really had no idea of what I was going to do except for be an academic because, you know, the big five philosophy firms aren’t always hiring,” Butterfield told Bloomberg last year.

After brief stints in the startup world at Communicate.com and Gradfinder.com, Butterfield came up with the idea for Flickr, a photo and video hosting service that he sold to Yahoo in 2005. Butterfield worked at Yahoo until 2008 and later founded Glitch, which became the multibillion-dollar company now called Slack.

Slack, an acronym for “Searchable Log of All Conversation and Knowledge,” traded under the ticker symbol WORK.