Catering staff from the Westminster headquarters of the Department for Business, Energy and Industrial Strategy (BEIS) have staged a Caribbean cookout outside their workplace during the latest leg of a long-running strike for better pay and conditions.

They served passersby and civil service colleagues jerk and fried chicken, rice and peas, salad and fruit punch in exchange for donations to their strike fund. By Friday, the outsourced workers will have walked out for 15 days since January after further action in February and May.

Security guards, postroom operatives and cleaners are due to join the strike on Tuesday. The contractors Aramark and ISS, who run security, catering, cleaning and support services at BEIS, have refused to raise pay to the 2019 London living wage.

Some have been left in such a precarious financial situation that their union, the PCS, set up food bank donations inside the BEIS offices on Victoria Street, around the corner from the Houses of Parliament.

Spirits were high on the picket line on Monday, where the strikers, who are mostly migrant workers, blew airhorns and danced to Jamaican reggae and Latin American reggaeton music. They have activities planned all week to raise public awareness of the strike.

A source close to the strike said if their demands were not met after the latest action the workers were prepared to stage an all-out, indefinite strike. The union has called for all contracted workers at government departments to be brought back in-house and to be paid a civil service wage.

The PCS announced on Monday that they were balloting outsourced cleaners at HMRC offices in Bootle and Liverpool for a strike next month over pay and conditions.

Last week, outsourced support workers at the Foreign Office also held a five-day strike in protest over low wages, after having been left without pay for six weeks.

“We’re still fighting,” said one striker at BEIS. “To be honest, it’s getting worse, I’m not lying. As you realise the cost of living is just going up.” She said their pay was increased from £7.83 to £9.01 this year, but it was not enough. “To me it feels like we are going down deeper. I look at my payslip and the tax is higher and the pension [contributions], which were £5.99, are now about £28.”

Sick pay was also an issue. Workers are not entitled to any help unless they are off for more than five days, the striker, a Jamaican woman in her 40s, said. One worker, who had been off for two days after an accident at work, received nothing. 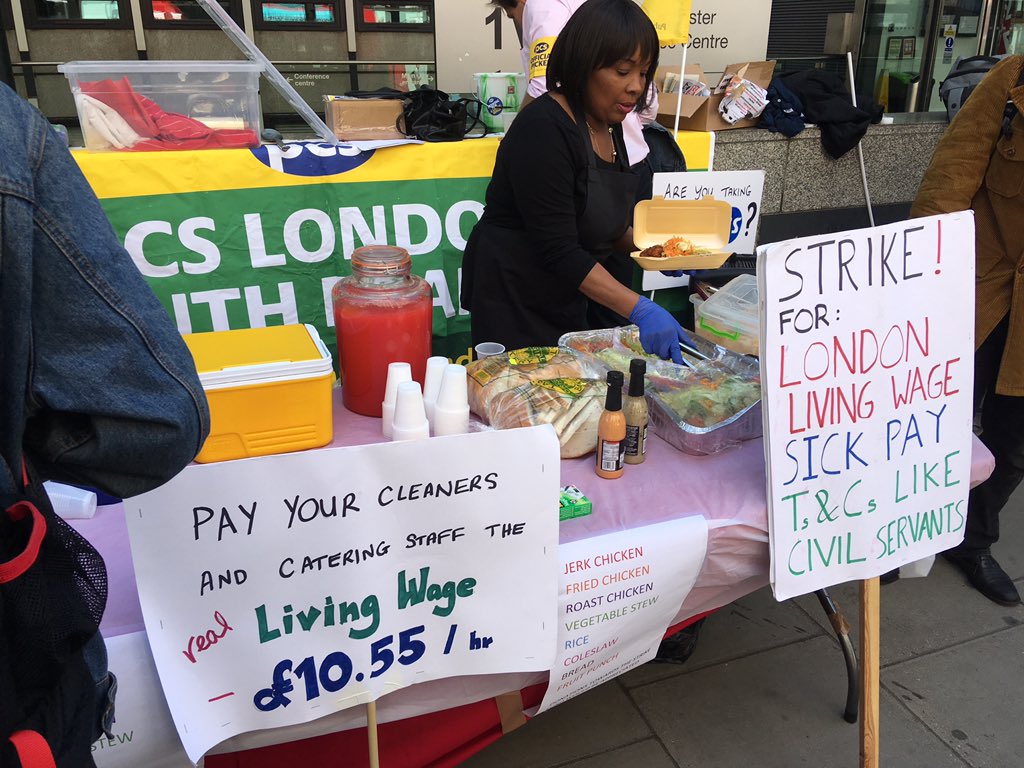 The food is delicious pic.twitter.com/jNPUuCzxyd

The business department has said it recognises that staff “deserve a fair wage for their hard work” and that the outsourced workers’ pay is aligned to “the median rates for comparable occupations as identified in the annual survey of hours and earnings”.

“That’s all lies,” one of the striking dinner ladies said in response to the statement. “They got 14 days’ notice that we were going on a strike. They didn’t come saying we give 10p. They have no consideration, nothing, for us, no consideration at all.”

Mark Serwotka, the general secretary of the PCS, said: “This escalation of action by our members shows the strength and depth of feeling they have about how they are being treated. To take one day’s strike action takes guts. But to run a sustained period of industrial action is heroic.

“Our union will continue to fight tooth and nail for our members for as long as it takes. Greg Clark [the business secretary] needs to heed the message staff in his building are sending him.”