The oil producing countries around the Gulf, including Kuwait, Saudi Arabia, Iraq and Iran, are crucial for supplying the world oil market. Most of their exports, about 18 million barrels a day or about 20 per cent of world demand, must travel through the Strait of Hormuz.

The strait, separating Oman and Iran, is 21 miles (33.8 kilometres) wide at its narrowest point, but the width of the shipping lane in either direction is only two miles wide, according to the US Energy Information Administration. Hundreds of ships a day move through the passage.

The bulk of this traffic heads for Asian markets like China, India and Japan. Large volumes of liquefied natural gas, an increasingly important fuel, follow the same route from the tiny emirate of Qatar.

But this area has been rocked by instability in recent weeks. In May, there were reports that four oil vessels were attacked near the Strait of Hormuz, heightening concerns over rising tensions between Iran and the United States. A day later, a drone strike on oil pipelines, claimed by Houthi rebels, forced the Saudis to suspend the flow of oil to the western side of the country.

On Thursday, two more tankers were rocked with explosions and fire near the strait. At least one vessel was set ablaze, and crews were forced to abandon ship. 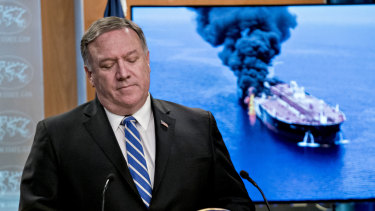 US secretary of state Mike Pompeo blamed Iran for the attack.Credit:Bloomberg

Iran’s coastline covers much of the east side of the Gulf, and analysts say that, as the United States tightens sanctions on Iran, Tehran would be well-placed to harass shipping with small boats, missiles, mines and other weapons. Experts doubt that the Strait of Hormuz could be shut down, in part because the US Navy maintains a robust presence in the region.

Helima Croft, global head of commodity strategy at RBC Capital Markets, an investment bank, notes that the Iranians have been mentioned as possible suspects behind the attacks, and that they might consider such tactics an appropriate response to the sanctions, which “are viewed from Tehran as economic warfare designed to elicit regime change.”

Analysts say that whoever was behind the recent attacks might be trying to make the point that there is no way around the Gulf routes. The reports of attacks in May on four ships occurred in waters off Fujairah, an important port on the Gulf of Oman with facilities designed to bypass the Straits.

Saudi Arabia does have a safety valve in case the strait becomes too dangerous: an East-West pipeline that could carry crude to the port of Yanbu on the Red Sea coast. But the drone attack claimed by the Houthi rebels managed to briefly shut down that route.

The other Gulf producers, including Iran, are more dependent on the strait for their exports, although Abu Dhabi has an oil pipeline to Fujairah.

Jitters in the oil market

So far, the oil markets have largely taken the attacks in stride, although “the fact that we have had a second series of incidents has definitely heightened concern,” said Richard Mallinson, an analyst at Energy Aspects, a market research firm. 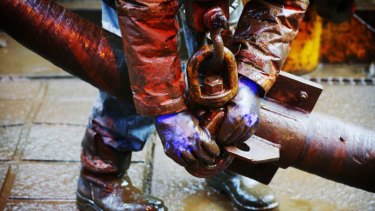 Oil prices rose on the news but analysts say traders are probably betting that the smoldering tensions will not burst into a full-blown conflict.Credit:Jessica Shapiro

Prices for Brent crude rose about 3.5 per cent Thursday to more than $US61 a barrel but remain well below their recent highs of about $US72 a barrel in mid-May.

Analysts say that traders are probably betting that the smoldering tensions will not burst into a full-blown conflict. Another factor is that slowing growth in the world economy, weighed down by trade tensions between the United States and China, has weakened demand for oil.

And then there is the US resurgence in production to consider. There is a sense, Croft said, that the shale oil boom in the United States, where oil production grew an extraordinary 17 per cent in 2018, can compensate for any jolts in world oil supply.

Croft worries that a major conflict or a cyberattack that shuts off a large portion of Gulf exports could prove a rude awakening. “There is no way the market is insulated from that because of US shale,” she said.

‘I’m not a grieving widow, I’m a seething widow’