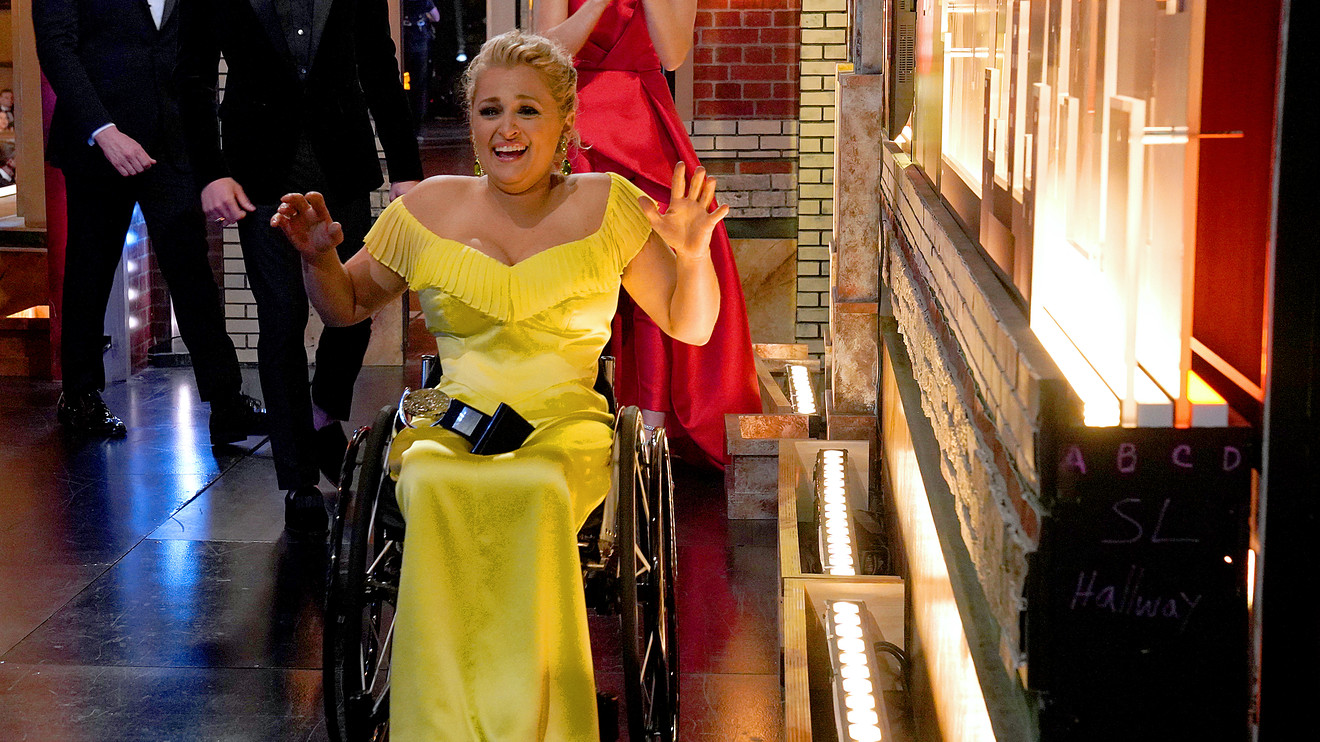 For most of Sunday night’s Tony Award winners, it was a familiar scene: their name was called, followed by a victorious walk down the aisle and up the stairs to accept the prestigious accolade.

And then there was Ali Stroker’s altogether different win.

The actress starring as Ado Annie in a revival of “Oklahoma!” became the first-ever wheelchair user to win a Tony in the award’s 73-year-history. She emerged from backstage to accept the award because there was no ramp onto the stage from the audience.

“This award is for every kid who is watching tonight who has a disability, who has a limitation or a challenge, who has been waiting to see themselves represented in this arena. You are,” the 31-year-old told the adoring audience.

Stroker is in a wheelchair after spinal injury in a car crash at age 2. Her acting career started at age 7, with a backyard production of “Annie.”

After her historic win, Stroker told reporters that Broadway theaters are usually wheelchair accessible for audience members — but it’s a whole different show backstage. “I would ask theater owners and producers to really look into how they can begin to make the backstage accessible so that performers with disabilities can get around,” the New York Times quoted her saying.

For disability and mobility advocates, Stroker’s win was an inspiring moment. But the absence of a ramp was the all-too familiar scene — even as employment rates for disabled Americans improve, and public places and workplaces become more accessible.

“There’s a lack of understanding and there’s still a way to go,” said Nick LiBassi, vice president of partnership expansion at the United Spinal Association. However, accessibility has greatly improved over the years, he said. For example, LiBassi, who uses a wheelchair, moderated a conference in October, but the stage lacked a ramp. So people in attendance had to carry him up to the stage, LiBassi told MarketWatch.

“It just goes to show how much harder [Stroker] had to work,” said LiBassi. “It just hit something with me that I was proud for her. I was proud for her and proud for our community.” He watched the awards last night to see if Stroker, someone he’s met, would win. He has used a wheelchair for 23 years and doesn’t view himself as disabled.

The employment gap between people with and without disabilities has been narrowing in recent years.

Employers have to make “reasonable accommodations” to workers in wheelchairs under the Americans with Disabilities Act, LiBassi said. That could mean installing ramps, accessible bathroom stalls and keyboards, he said. But the “reasonable accommodation” can be open to interpretation and LiBassi said a job candidate’s disability can sometime “scare off” employers who are looking for the “path of least resistance” with a hire.

Don’t miss: Has the workplace improved since this signature George H.W. Bush law?

Nadine Vogel, the CEO of Springboard Consulting, which helps companies incorporate disabled workers into their ranks, said last night’s award planners should have been ready with a ramp. A representative for The American Theatre Wing and The Broadway League, the organizations administering and presenting the Tony Awards, did not respond to a request for comment.

Vogel said some companies are making strides to make their workplaces more wheelchair-accessible, but others have a ways to go.

Stroker’s speech would not only make disability advocates proud, said Vogel. It could also get executives thinking about accessibility in their own workplaces. “Those are the things that get the conversations started,” she said.

Stroker spoke at Springboard Consulting’s annual conference in 2016. She talked about her life and her career, which has included appearances on “The Glee Project,” “Glee” and the musical “Spring Awakening.”

But it all started with Stroker’s turn as Annie in the backyard production years ago.

“That is when I really remember my life beginning. I learned that I get to choose who and what part I wanted to play in my own life, and it really changed the game,” she said.

So You Started A Business. Now Can You Lead It? – Forbes