The backlash against air travel was front of mind for 150-or-so top airline executives who gathered in Seoul this week, where the International Air Transport Association warned anti-flying sentiment would only “grow and spread” if they let it go unchallenged.

The European Union says a person flying from London to New York and back generates about the same carbon emissions as they would from heating their home for an entire year. 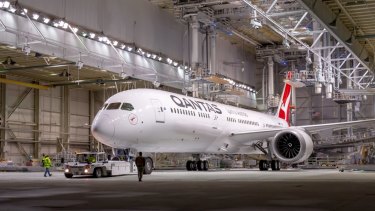 Qantas operated its first flight powered by a meaningful amount of biofuel last year, using a 787-9 (pictured) and is trying to establish a dedicated bioful crop in Australia.

“My answer is that there’s nothing to be ashamed of. We’re actually an industry that’s put in place a very ambitious plan to slow down, to stabilise and then in fact reduce our CO2 emissions.”

Airline bosses say this makes theirs a leading industry when it comes to acting on climate change, and see the need to spread that message to combat anti-aviation sentiment.

“The communication battle is ours to be won or lost,” Qantas boss Alan Joyce said between meetings in Seoul.

“We’re meeting those targets already. We need to do more… to make sure the large proportion of people that are not convinced by this don’t fall into the wrong camp because they don’t have the right information.”

The industry’s plan is to cap its net carbon emission from next year, even as passenger numbers are forecast to double over the next two decades.

Starting next year airlines will use a scheme set up with the United Nations’ aviation body to offset emissions growth with credits from activity like growing trees, which sucks carbon from the atmosphere. 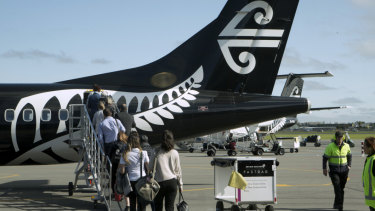 After 2035, the industry says the amount of carbon aircraft put into the atmosphere will fall thanks to technological and engineering advancements.

Carriers have already significantly cut fuel use – their single biggest expense – thanks to new, lightweight aircraft and other measures to fly as light as possible.

The global industry has improved its fuel efficiency by 2.4 per cent a year on average since 2009 – comfortably beating a target it set itself of 1.9 per cent.

Air New Zealand chief executive Christopher Luxon saw the biggest challenge for his industry coming in the next 20 or 30 years as other industries de-carbonised – making aviation’s relative contribution even greater.

“You’ve got to start that journey now,” he said.

The Kiwi carrier is one of several looking at whether battery power could be a clean, green alternative to jet fuel. It’s formed a joint venture with aircraft maker Aerei da Trasporto Regionale to explore electric or hybrid engines for its fleet of 68-seat turbo-propeller aircraft.

“In a country like ours with sustainable electricity and renewable electricity, it’s a good place for us to be heading to,” Mr Luxon told the Sydney Morning Herald and The Age.

“On turboprops, we could probably within seven to 10 years actually see an electric aircraft that could be flying in regional New Zealand.”

Environmental benefits aside, Mr Luxon also thinks electric engines would be cheaper to run and make the airline more profitable.

While tantalising, aviators’ electric dreams are some time off. A more fundamental and immediate solution, according IATA’s Mr Gill, is to replace oil-derived jet fuel with biofuel, which can cut emissions by up to 80 per cent.

“That’s available today,” he said. “All the pieces are in place – it’s within touching distance.”

The problem is that despite being cleared for commercial use and easily substituted for traditional gas, alternative fuels are barely being used – filling up just 0.01 per cent of the industry’s combined fuel tank today.

At two- to three-times the cost of traditional jet fuel, according to IATA, airlines just aren’t willing to put themselves at such a disadvantage in fiercely competitive and volatile business.

The solution, said Mr Gill, was for airlines to enter long-term biofuel supply agreements which will give manufacturers the confidence to start making the stuff at a commercial scale.

By 2025 IATA wants sustainable fuels to reach 2 per cent of total supply, a “tipping point” that it thinks would constitute a viable market, triggering a fall in prices and a broader uptake by airlines.

Efforts are being made. Virgin Australia started a trail late last year pumping a mix of traditional and sustainable fuel from American producer Gevo Inc. through the fuel system at Brisbane Airport, preparing that supply chain for an eventual transition to cleaner fuel.

And Qantas last January operated its first international flight powered with a meaningful amount of biofuel, using a 10 per cent blend of biogas derived from Ethiopian mustard seeds (or Brassica Carinata, as botanists call it).

That achieved a 7 per cent reduction in carbon emissions on the flight from Los Angeles to Melbourne compared to using standard gas.

Qantas and the agricultural technology group Agrisoma Biosciences are trying to grow the same mustard seeds in Australia, with the hope of producing our first aviation biofuel seed crop next year.

‘Too little, too late’

But IATA rejects putting a tax on emissions to hasten the shift away from traditional jet fuel, which it argues would only make airlines pay for their emissions with no guarantee of reducing them.

Despite their efforts, not everyone is convinced the airline industry is doing enough to combat its climate footprint.

Its emissions targets are “too little, too late”, according to Professor Will Steffen, a researcher and climate change expert at the Australian National University and a Climate Council member.

“Our entire economy – including aviation – must be down to net zero emissions by 2050 at the latest,” he said.

“Aviation would have to develop and fund a massive NET (net emission technology) program to continuously remove their 50 per cent of [2005 level] emissions they still plan to emit, and store them permanently underground.”

For Mr Gill, the hard questions facing airlines is not something he or IATA are too worried about.

“It’s actually something we’re inspired by,” he said.

“It shows we have a generation of potential passengers that are willing to discuss and debate and challenge us to do even more.”

The reporter travelled to Seoul as a guest of IATA and Korean Air.

Reporter for The Age

Charity severs ties with engineering firm over Adani coal mine