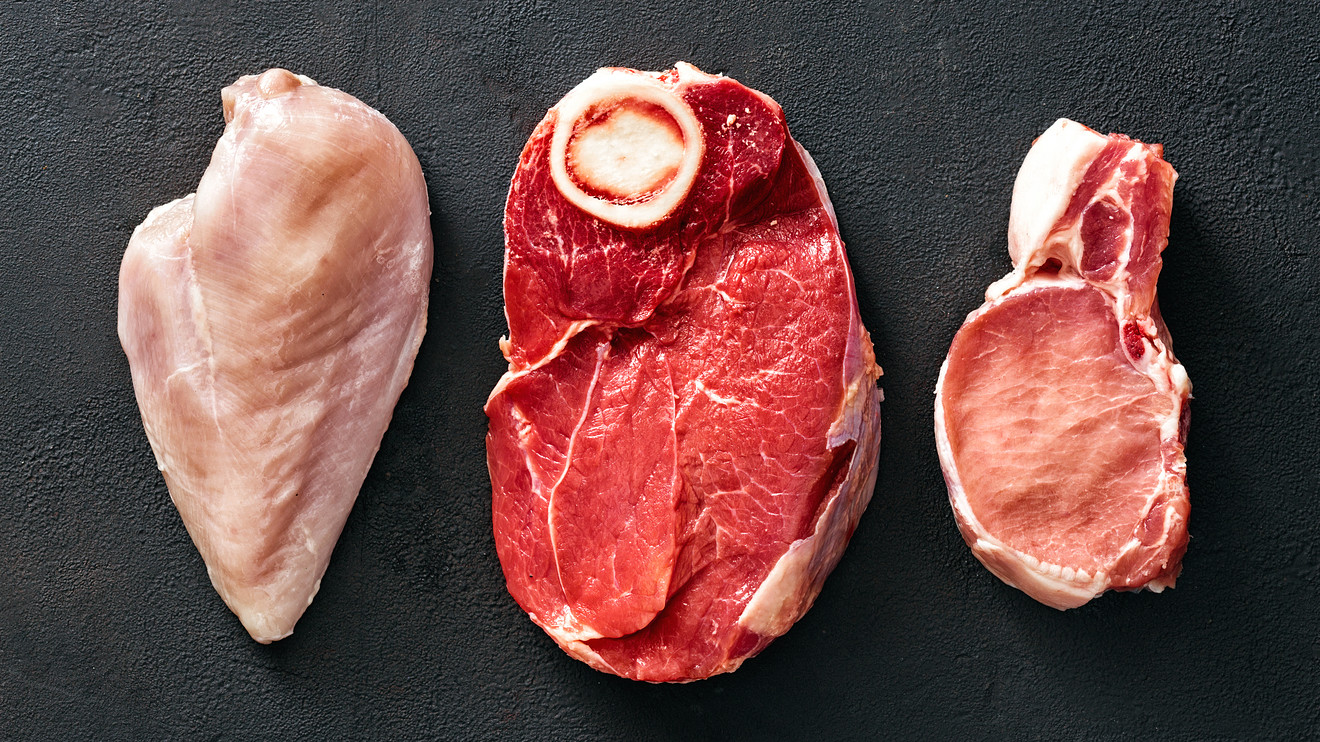 Consuming high quantities of white meat like chicken could raise your cholesterol just as much as eating red meat like beef, according to a study published Tuesday in the American Journal of Clinical Nutrition.

Researchers enlisted 113 healthy men and women ages 21 to 65 years old, who rotated four-week periods eating mostly red meat, white meat or plant protein diets, separated by two-week intervals where they returned to their normal diets before shifting to the next protein. They were also split into two groups; one that ate high-saturated fat, and one that ate low-saturated fat, to test the effect of saturated fatty acids on cardiovascular health.

During the red-meat month, subjects ate corn-fed beef (the most commonly eaten beef in the U.S.) and pork. The white-meat month centered around chicken and turkey. And the plant-based month featured legumes, nuts, wheat and soy products. The subjects picked up their food from the lab, so that their entrees, side dishes, snacks and drinks were standardized. Participants also abstained from alcohol, vitamins and processed meats (to prevent the chemical additives from skewing the results) for the duration of the study. Subjects gave blood samples at the beginning and end of each four-week diet, and were also regularly weighed and counseled about sticking to their meal plans.

At the conclusion of the study, the commonly-held belief that swapping chicken for beef always works to control cholesterol was put out to pasture.

“When we planned this study, we expected red meat to have a more adverse effect on blood cholesterol levels than white meat, but we were surprised that this was not the case — their effects on cholesterol are identical when saturated fat levels are equivalent,” wrote the study’s senior author, Dr. Ronald Krauss at the Children’s Hospital Oakland Research Institute.

Related: 5 things to cut out of your diet right now to reduce high blood pressure and lower the risk of heart failure

What’s more, the results were similar whether the red meat or poultry was high or low in saturated fat, although the diets high in saturated fat in particular saw an increase in LDL (aka “bad”) cholesterol linked to cardiovascular disease.

The plant proteins were found to be the healthiest of all for blood cholesterol, and the study concluded that the results support growing recommendations to adopt plant-based diets with high vegetable content, “but do not provide evidence for choosing white over red meat for reducing CVD (cardiovascular disease) risk.”

Dr. Alice Lichtenstein from the American Heart Association, who was not involved in the study, told MarketWatch the study’s recommendations echo “what we have been saying for awhile: that it’s a good idea to eat more plant-based foods and cut down on animal products, which is also good for the environment,” she said.

Related: Energy drinks may be linked to frightening side effects for your heart

That could be hard for many meat-loving Americans to swallow. Indeed, the Department of Agriculture expected U.S. citizens to eat a record 222.2 pounds of meat and poultry per person last year, thanks to lower animal prices and consumers willing to buy more beef and chicken — perhaps in part to the popularity of high-protein and low-carb diets like keto.

But many health-conscious consumers are now developing a taste for plant-based meat alternatives as a source of protein. Indeed, one third of Americans (and 37% of millennials) plan to buy more plant-based products over the next year, Mintel reported. And the meatless substitute market earned about $555 million in revenue in 2017, according to a report from Nielsen, the Good Food Institute and the Plant Based Foods Association.

Related: The meatless Whopper is just the beginning — get ready for vegetarian tuna, steak and eggs

This shifting health perspective has helped fuel the growth of plant-based meat alternatives like Beyond Meat BYND, +4.98% and Impossible Foods — the latter has brought its meat-like vegetarian patties to Burger King, White Castle and Carl’s Jr. already. Nestle NSRGY, -1.81% will also be debuting plant-based Awesome Burgers across the country later this year, while hot dogs and chicken nuggets maker Tyson Foods TSN, +0.95% is rolling out vegan protein.

This doesn’t mean shoppers must completely skip the meat and poultry aisle, however.

“The bottom line for the consumer is, if they choose to consume moderate amounts of red meat, it’s got to be the leanest cuts with no visual fat, or the leanest ground beef they can get, which is then served in moderate portion sizes,” said Dr. Lichtenstein. (A portion size of protein is generally the size of a deck of cards.) “In terms of poultry, it’s a boneless, skinless chicken breast or thigh.”