Patty Angeles got the deal of a lifetime when she went shopping two years ago for secondhand furniture for her new apartment.

The 25-year-old from Austin, Texas picked up almost-new shelves — and a fiancé.

“We tell people we met on an app,” Angeles told MarketWatch.

That’s true, but not in the way most people think. Angeles and her husband-to-be Ben Vineyard made their match two years ago, not on Tinder IAC, -0.61%  or Bumble, but on an OfferUp, an app that allows users within a five- and 30-mile radius of each other to buy and sell items like used furniture, appliances and clothing.

Patty Angeles, a 25-year-old from Austin, Texas picked up shelves on an app for used goods — and a fiancé.

She turned to OfferUp after she had seen some shelves she liked at IKEA, but didn’t want to pay the $70 price tag. When she found the exact same shelves on OfferUp for $30, she messaged Vineyard, and arranged to pick them up in the parking lot of a nearby Walmart WMT, -0.73%

When she saw him standing in front of his car, she thought, ‘Oh my gosh, who is that?’ After she made purchased the shelves, she sent him a message: “Wanted to say you’re really cute and if you’re ever up to meeting outside of OfferUp, I’d love to!”

They bonded over pancakes on their first date and their mutual love of working in tech. Angeles works in software sales, and Vineyard is an engineer. They’ve used the app to save $3,000 in the last two years selling their old clothing, furniture, electronics and Angeles’ old jewelry and handbags.

See also: Instagram-savvy millennials humblebrag about their wealth on Bumble and Tinder

But Angeles and Vineyard are part of another trend: The growing market for gently-used secondhand items. The secondhand market was valued at $24 billion in the U.S. in 2018 and it’s expected to increase in value to $64 billion by 2028, according to online store ThredUp and retail analytics firm GlobalEData.

More brides are buying used items to save money on their weddings. Student debt, stagnant wages and an uncertain economic outlook are proving to be a boon for the second-hand wedding industry.

The average wedding costs $33,391 in 2018, broadly in-line with the previous year, according to a survey from the wedding website The Knot. but that’s based on people who use that site. Couples who use a wedding site may be likely to spend more money on their wedding than those who don’t. 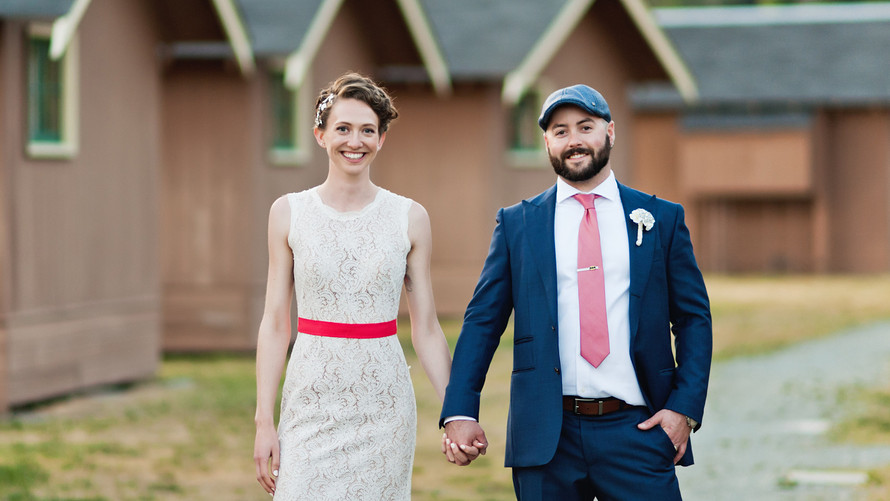 Candi Block, 29, doesn’t believe in spending the equivalent of a down payment on a house for her wedding. The Reno-based wedding planner, paid around $15,000 on her big day by purchasing decorations and her wedding dress second-hand.

Block, who tied the knot in 2016 outside in Cama Beach State Park in Washington, describes her wedding as “vintage and rustic.” She spent under $100 adorning the tables with white and ivory table runners and lace doilies she sifted through at vintage shops.

She used wildflowers and carnations for simple floral arrangements, and dressed them up with brooches, charms and pieces of jewelry she found at flea markets for no more than $5 each. Her dress was $200, also purchased second hand, a fraction of the cost since the average American spends $1,564.

Even if you buy a wedding dress new, you could still walk away with almost what you paid for if you sell it on secondhand marketplace. A used wedding dress in good condition and under two years old can typically sell for 50% of the retail price, and if the dress is from a big name designer like Vera Wang or Oscar de la Renta, you could make back closer to 60% of the retail value.

“I felt like it didn’t make sense to spend a huge chunk of our overall budget on a dress I was going to wear once,” Block says of finding the all-lace, sleeveless gown in her size. “No one is ever able to guess if your dress is designer or not, so it really doesn’t matter whether you spend $500 or $5,000.”

Meanwhile, Angeles and Vineyard have spent some of the $3,000 they’ve made on trips to Boston, Mexico City and Philadelphia. The rest will go towards their wedding in June. Angeles says she’s already bought used centerpieces for her wedding.

Business must act on a new corporate purpose – Financial Times