The group’s share price came under pressure in early 2018 after short sellers and governance experts raised questions about the quality of Blue Sky’s valuations of its assets and a lack of transparency about its holdings.

The Brisbane-based group had $2.8 billion of fee earning assets and is well known in venture capital circles for its tech investments including Shoes of Prey and Vinomofo, as well as its investment in water entitlements and real estate.

The first meeting of creditors will be held on Wednesday at the offices of administrator Pilot Partners and will be attended by laenders, including possibly the founders of the company, including former executive and significant shareholder Mark Sowerby.

Perth-based shareholder, John, who declined to give his surname, said he bought into the stock when it was trading at $1.80 because he thought it had been oversold and its share price would improve over time.

“I bought in because I found it too lucrative looking at its share price and what it once was, but it was a bubble,” he said.

I bought in because I found it too lucrative looking at its share price and what it once was, but it was a bubble.

He still holds shares and calculates he has lost about $5000 based on Blue Sky’s current (frozen) share price of 18 cents.

“I do feel disappointed and frustrated. It is a lesson learnt. The saying ‘don’t try and catch a falling knife’ applied all along to Blue Sky, we just didn’t take note of it,” he said.

Another shareholder, a electrician from Melbourne who declined to be named, says he is gutted about Blue Sky’s collapse after losing about $80,000 investing in the stock. The shareholder said he purchased shares in Blue Sky in 2013 at $1.70. He sold his shares at 70c ahead of the group’s collapse this week.

“I’m still shocked the money has gone. I still don’t understand what happened to the business.” 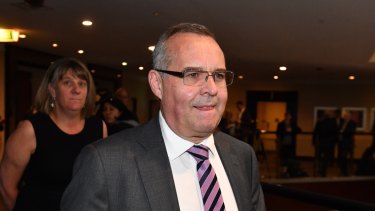 Mark Korda, from KordaMentha, is one of the receivers to Blue Sky. Credit:AAP

Meanwhile, a former employee at Blue Sky, speaking on condition of anonymity, said they felt burdened by their association with the company’s failure.

“I really believed in the business and always acted in good faith on behalf of investors. There’s a fair amount of guilt and embarrassment. It’s really left me questioning my own judgement.”

“It’s really unfortunate that what was a unique and interesting idea was poorly executed and ended in ignominious fashion. Greed is what brought them undone.”

Speaking to the Herald and The Age on Friday, Mr Mayne criticised Blue Sky’s governance.

Mr Mayne slammed the corporate regulator, the Australian Securities and Investments Commission, for being “asleep at the wheel”.

“There’s no track record of reining in Blue Sky-type operators, because no one is scared of the regulator in Australia,” Mr Mayne said.

Blue Sky announced last week that ASIC had dropped its investigation into the fund manager.

The chair of the meeting on Wednesday can admit some parties, for example representatives from the corporate regulator, into meetings at their discretion.

Administrator Brad Hellen was not contactable on Friday.

Josh Dye is a news reporter with The Sydney Morning Herald.

Sarah Danckert is a business reporter.