The reputational damage this brings risks affecting Woolworths’ core business, Perpetual believes – and as a large shareholder it has made its view clear to the company.

The current Woolworths management under chief executive Brad Banducci and chairman Gordon Cairns are said to be sympathetic to Perpetual’s view – or are not fighting it, at least.

Cairns, a former chairman of David Jones and Origin, is a corporate warrior with a history of negotiating the demands of large shareholders.

Perpetual, for its part, has a history of being an activist investor and a quiet kingmaker in many corporate deals and management changes.

The fund manager is believed to have been a major supporter of Banducci’s appointment in 2016, and increased its stake at the time – punting on a turnaround in the supermarket group’s fortunes.

Perpetual argues that it is not pressuring the Woolworths board when it shares its views on the retailer’s portfolio of assets. But the reality is that Cairns and Banducci will have received its message loud and clear, and will be disinclined to ignore it. 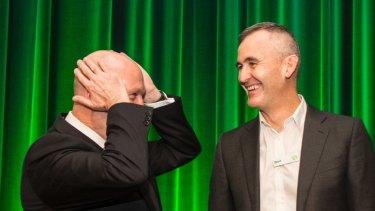 It is no secret that Woolworths has been undertaking strategic reviews of various assets including its pokies/pubs business and the BigW discount department store chain. It sold its petrol stations last year for $1.72 billion.

Last August, there was speculation that Woolworths was evaluating an option to float AHL – which is 25 per cent owned by hotelier Bruce Mathieson. There was also talk that private equity group KKR had offered to buy the business, and also that Mathieson had considered buying out Woolworths’ 75 per cent.

Any deal will have to overcome obstacles created by arcane regulations in Queensland that tie together bottleshop and hotel ownership. And bottleshops are a crucial part of Woolworths’ wider business.

Its major supermarket rival Coles had the same problem. After years of looking for a way to rid itself of gambling assets, it offloaded its hotel and pokies business a few months ago in a complicated deal that allowed it to get around the Queensland licensing laws, and hold on to its lucrative bottle shops.

Coles reached a joint venture arrangement with KKR which split the revenue and profits between the shareholders, while retaining part ownership.

That deal has only placed additional pressure on Woolworths to find a solution for its pokies problem. The odour of problem gambling is only getting stronger with time.

Meat in the sandwich: inside Subway’s shrinking Australian business