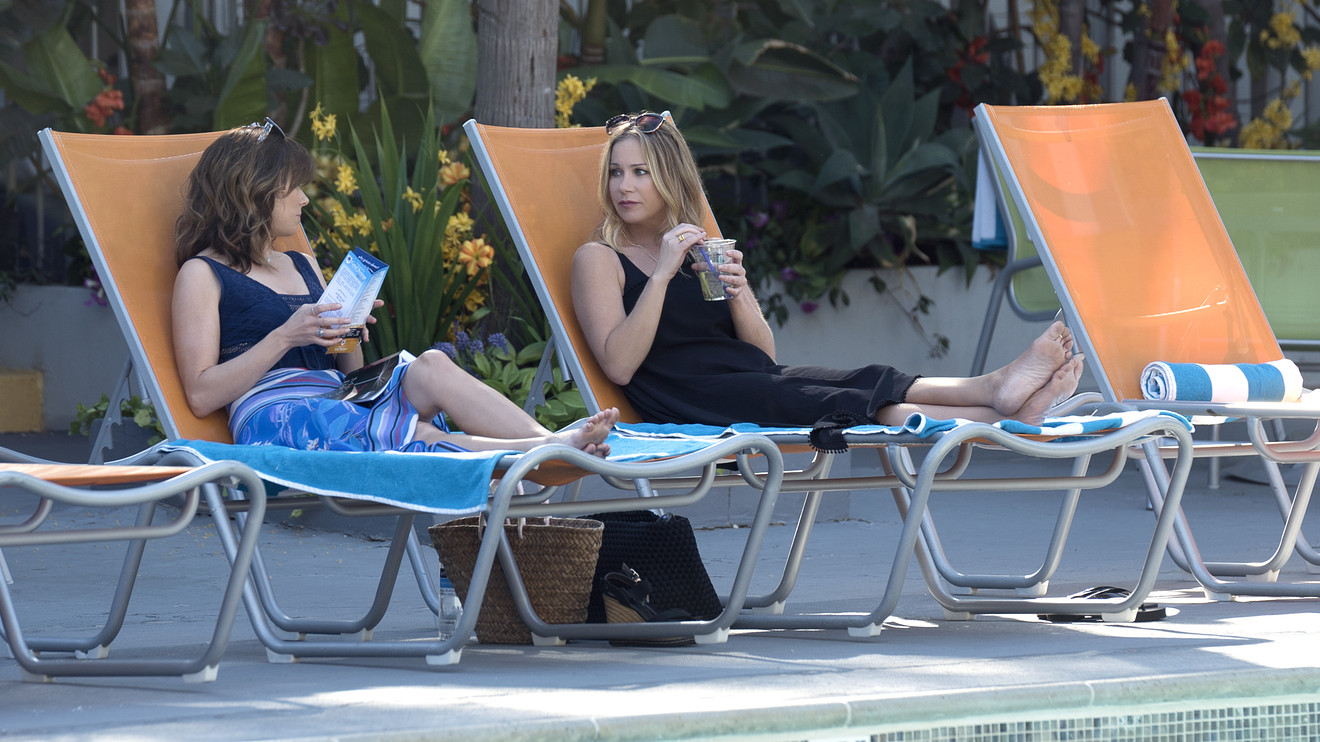 There’s no manual for navigating grief.

The new Netflix NFLX, +1.22%   dramedy “Dead to Me” follows Jen (Christina Applegate), a widow from Laguna Beach, who is grappling with grief after her husband is killed in a hit-and-run. She finds herself at a retreat in Palm Springs with her support group sipping margaritas poolside, hitting on a fellow widower during a counseling session and letting loose at a karaoke session.

“I thought there was such a story to tell in giving an escape to people in that amount of pain,” Liz Feldman, the creator and executive producer of “Dead to Me,” tells MarketWatch. She sent the characters on the show to a grief retreat after conversations she had with grief counselors around the country, and based on her own experience with losing loved ones. “It’s an escape for a little bit, but you can’t escape grief,” said Feldman, 41. “It just finds its way back to you.”

‘You can’t escape grief. It just finds its way back to you.’

Off-screen, millennials are writing their own way of dealing with loss with the help of grief retreats, social media and dinner parties where all of the guests have lost a loved one.

San Francisco-based Rachel Reichblum, 29, lost both of her parents within 14 months of each other. Her father passed away from brain cancer when she was 25. Her mother was diagnosed with the same form of brain cancer and passed away when Reichblum turned 28 and was about to get married.

“It’s not like there’s a packet, ‘Lost a parent? Here’s how you grieve,’ someone gives you,” Reichblum tells MarketWatch.

She discovered the blog turned book “Modern Loss,” which was created by Rebecca Soffer and Gabrielle Birkner, millennials who had both struggled with loss and wanted a resource that wasn’t overtly religious, too clinical or, as their blog describes, “cheesy.”

“Society doesn’t know how to handle grief. It wants you to move on quickly. It makes people uncomfortable, but it’s important to be in a space where your feelings are validated, not brushed under the rug because that will come back to bite you in the ass,” Reichblum says.

She went to a grief retreat last year hosted by the “Modern Loss” founders at The Kripalu Center For Yoga & Health, a nonprofit in the Berkshires in Massachusetts. The three-day package featured a combination of physical and mental exercises like “writing prompts,” hiking, yoga and dance.

“We’re a let it all hang out crowd,” Soffer explains. “There will be humor in this. We will be laughing, and that’s okay.” The four day retreat costs $295, not including lodging (the starting price for a private room at Kripalu costs $185 per night including food, but guests are not obligated to stay on-site). Reichblum says she paid around $600 last year for the retreat and lodging.

Guests participated in writing sessions with prompts asking them to describe their favorite meal with a loved one they lost; or to recall a song or mantra that reminded them of the person close to them who passed away. Reichblum found the writing sessions to be the most therapeutic.

“I had become so fixated on losing stories about my parents. I thought I was going to forget them. It felt so overwhelming,” Reichblum said. “That exercise pulled out those anecdotes in a way that reassured me that they were still in me. They’re not always funny, they’re not always happy, but they feel like a hug.”

The experience motivated Reichblum to start a social conversation around grief. She created the Instagram page @ThatGoodGrief as a healing tool to post photos of her parents, inspirational quotes like, “Do what you can when you can (it’s not a race),” and things she wishes she told her mom and dad before they passed away.

It’s become her own photo journal, inviting others — 5,670 followers — to interact via her “Moving Through” InstaStory, which features the question: “What are you struggling to face without your person?” It lists dozens of responses, like “figuring out life without my husband,” or “that he won’t walk me down the aisle.” She also has posts advice like “6 ways to be a good grief partner.”

“So much of grief happens in your own head that it’s really nice to validate your feelings — not just the ones of sadness, but, ‘Am I crazy for laughing at this thing?’ or, ‘Am I crazy for saying I want to murder this person for saying this?’” Reichblum admits.

Los Angeles-based Carla Fernandez, 31, retreated to the comfort of food and new friends. She built a community after she lost her dad to cancer in 2010 when she was 21. “He was in the wine business, and food and wine has always been a big part of our family heritage. Dinners with him were what I missed the most, ” Fernandez says.

Fernandez wanted a more social way of dealing with loss, asking herself, ‘How do we stop the isolation that comes with grieving?’

She created The Dinner Party, a community of 20 and 30-somethings who have experienced the loss of a parent, partner, child, sibling or other close family member or friend. To join, members pay $35 for the year and get matched to a dinner party table close to where they live. The gatherings are typically monthly, and guests are asked to participate in the potluck-style dinners by brining a dish of their choice.

“The menu includes everything from ‘my mom’s favorite recipe,’ to ‘I’m really stressed, can I bring a six-pack and a pizza?’” Fernandez explains, adding that food became a vehicle to share memories of loved ones. “I know my partner’s mom Sue because I had her lemon thyme cookies and she’s gotten to know my family heritage because I’ll make paella, which is something my dad liked to make. It’s a way to get to know people.”

Dinner starts with people putting the finishing touches on their dishes (homecooked, store-bought or delivered), then everyone introduces themselves.

“We talk about going back to work after a loss, or how a career changes; changing relationships, dating — dating always comes up. ‘What do I do when I’m on a date and someone asks? Do I talk about them in the past tense?’” Fernandez says of the dinner topics.

The success of the group has motivated her to launch her first retreat this year. She’s calling it Dinner Party Camp in Oconomowoc, Wisc. this September. The itinerary for the $350 three-day weekend respite includes light-hearted activities like a “grief dance party,” bonfire, meditation, swimming in the lake; and more serious endeavors like a “mapping your grief journey” session, which asks guests to write about what their grieving process has been like, noting good days and bad.

‘Death is trivialized, but everywhere; it’s constantly in your face.’

Psychologists say society has been dismissive of dealing with death, despite being constantly confronted with it on the news and in pop culture with shows like HBO’s T, +1.18% “Game of Thrones.”

Now, younger generations are making the conversation less taboo by building communities around grief instead of isolating themselves or burying their feelings.

“Millennials are more socially connected. Part of this could be longing for more of a community,” Susan Krauss Whitbourne, a professor emerita of psychology at the University of Massachusetts Amherst. “It’s a general change in culture and it’s also maybe having a generational effect on people who are new to grief.

“We live in a society that has this really bizarre attitude toward death and dying,” she says. “Death is trivialized, but everywhere; it’s constantly in your face. Anytime people can work through these feelings and feel support it’s all good — unless things go off the rails and somebody really breaks down,” Krauss Whitbourne says.

That’s exactly what happens to Jen on “Dead to Me.” By the end of her tequila fueled bender, she breaks down to her friend Judy (Linda Cardellini) about how her life has been destroyed after losing her husband.

“Grief isn’t something that can be fixed or stopped, so for us it’s about ‘how do we stop the isolation that comes with grieving?’” Fernandez says.

We turned our side project into a £60,000 business while still working full time...