German business leaders are appealing to voters to resist populist parties in this month’s European elections, in an unusual intervention that reflects alarm about the rise of nationalism and the threat it poses to the EU’s single market.

In an interview with the Financial Times, Paul Achleitner, chairman of Deutsche Bank, said civil society had to “fight back against those who are promising easy, populist answers” which are aimed at “marginalising certain social groups”.

“Europe’s diversity and cultural pluralism is the continent’s big advantage relative to China and North America,” he said. “We must not be tolerant towards intolerance.”

A similar call came from the German banking association, which said it strongly opposed “nationalist tendencies, isolationism and protectionism” and supported “pro-European parties that want to lead Europe towards a successful future”.

“Let’s all try to prevent protectionist and populist tendencies getting stronger,” said a pre-election social media campaign signed by the bosses of Germany’s leading banks, including Martin Zielke of Commerzbank and Christian Sewing of Deutsche. 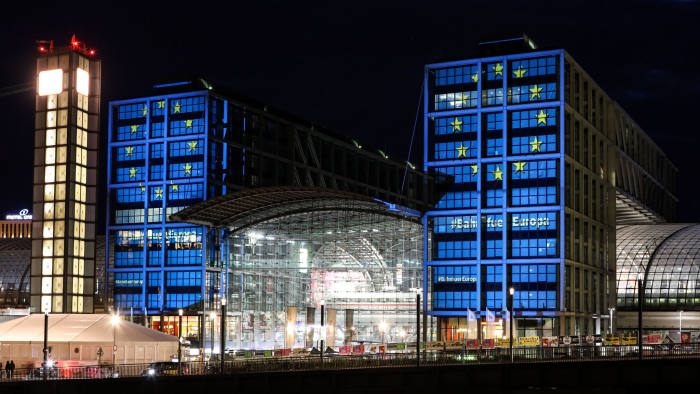 The pro-EU cheerleading is taking many forms. Deutsche Bahn is lighting up Berlin’s central railway station in the colours of the EU flag while Lufthansa is branding one of its Airbuses with the slogan “Say yes to Europe”, in big letters on its fuselage. “Our Europe needs your vote,” said Lufthansa chief executive Carsten Spohr.

So far the messaging appears to be having little effect. Polls suggest that the EU elections will see the main centre-right and centre-left parties lose ground while Eurosceptic groups from across the continent will see gains.

Among them is the rightwing Alternative for Germany, which rose to prominence as part of a backlash against Angela Merkel’s liberal asylum policy and is now represented in all 16 of Germany’s regional parliaments. The AfD is currently on 12 per cent in opinion polls: in the last European election in 2014 the party garnered only 7 per cent of the vote.

German industry, which has been one of the biggest beneficiaries of the euro and the EU single market, has watched the populist onslaught on EU institutions with growing dismay. It is also deeply worried about Brexit, and the impact it could have on supply chains, particularly those of German carmakers with operations in the UK.

One reason for industry’s concern is a fear that the growing strength of the AfD could lead to restrictions on immigration, at a time when falling birth rates and a shortage of skilled labour is making Germany increasingly reliant on a steady flow of foreign workers. A recent study by the IAB think-tank found the German economy requires at least 260,000 immigrant workers a year by 2060 to make up for the negative demographic trends in the German labour market.

There is also a broader nervousness about rising protectionism across the world, and what it will mean for Germany — a country whose export success is predicated on open borders and free trade.

Business circles in Germany have in particular expressed horror at Donald Trump’s “America First” trade policies, his rejection of multilateralism and his threats to impose punitive import tariffs on European cars.

The pro-Europe messaging by business leaders is principally aimed at their own workforces. Guido Kerkhoff, boss of conglomerate Thyssenkrupp, said business had to do a better job of explaining “why Europe is important for us, why we need free markets and free trade for our success, and not this retreat into our own shell”.

The appeals are designed to encourage a high turnout on election day, amid fears that voter apathy could benefit far-right parties. In 2014 election turnout stood at a disappointing 48.1 per cent in Germany, far lower than the 76.2 per cent recorded in the 2017 Bundestag election. Hence the tone of business’s get-out-to-vote campaign.

In one particularly striking example of such pro-EU activism, Germany’s biggest trade associations — the BDA, BDI, DIHK and ZDH — this month issued a joint declaration saying the EU parliament election would “determine the future of Europe”.

The groups said 60 per cent of Germany’s exports go to the EU and “millions of jobs in our country depend on cross-border trade”. “An intact single market is a prerequisite for a functioning economy and for our prosperity,” they said.

They also said only a united EU was capable of negotiating on an equal footing with other global powers and “defending the values and economic interests that bind us”. Individual member states such as Germany were “too small for that”.

More high-school students are using this hack to get a head-start on college —...