Scott sent a signal that the 105-year-old company wants to buttress itself from the challenging retail environment, which is proving tough going for even the most experienced companies.

Wesfarmers is a diverse outfit with a strong chemicals, energy and fertilisers division, and it sees Kidman as an attractive opportunity in a location that many people describe as being in Wesfarmers’ “own backyard”.

And in recent times the conglomerate has given itself a substantial corporate facelift, including the demerger of its Coles supermarkets business late last year.

Kidman’s Mount Holland lithium deposit, which is considered “world-class”, is about 450 kilometres east of Perth. The refinery that will process material from the lithium mine is to be built in an industrial area on Perth’s southern outskirts where Wesfarmers already operates.

Scott said on Thursday the ability to process the lithium into the chemical, lithium hydroxide, was crucial, with the end product about 15 times more valuable than the raw material straight from the mine.

With its bid for Kidman, which has the backing of the Kidman board and major shareholders, Wesfarmers is hoping to ride the wave of surging demand for electric vehicles. Lithium hydroxide is a key ingredient in the large batteries used by EVs, and as countries around the world set ambitious EV sales targets, or introduce tougher restrictions on traditional combustion engine vehicles, the market for electric cars is very promising.

While the bid took the market by surprise this week, sending shares in Kidman soaring while also lifting other lithium stocks, it was not the conglomerate’s first attempt to get into lithium bandwagon.

It is understood Wesfarmers was the underbidder for a 50 per cent stake in Mineral Resources’ Wodgina lithium project in WA’s Pilbara region. Albemarle, a US-based specialty chemicals company with key lithium operations, was announced as the successful bidder last year for the 50 per cent interest and joint-venture project, at a sale price of $US1.15 billion ($1.64 billion).

On Thursday, Scott confirmed his company had been interested in lithium for a long time. “Our initial work analysing opportunities in the lithium space goes back many years,” he said. 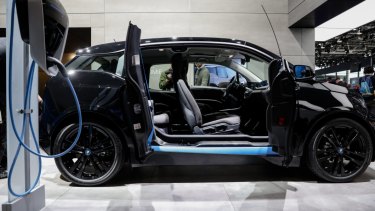 Wesfarmers is hoping to ride the wave of surging demand for electric vehicles.Credit:Bloomberg

While a successfully completed Wesfarmers/Kidman deal would be a boost to the conglomerate’s portfolio, it would also lift the stocks of Scott, who has been the company’s chief executive for about 18 months.

With Wesfarmers bid for rare earths miner Lynas still live but apparently in something of a holding pattern, no new chief executive would want to have two highly public bids for much smaller companies either stalled or rejected.

Andrew White, resources analyst with Curran and Co, says the bid for Kidman does not indicate the conglomerate’s interest in Lynas had eased.

White says the Kidman move would cost Wesfarmers almost $1.4 billion in total, when the cost of the deal was added to the $600 million of estimated project capital expenditure.

“It still makes Lynas, that offer, look relatively cheap. I mean Lynas is an operating asset and it’s got a plant up and running,” he says.

“They’ve got a lot of capital up their sleeve, Wesfarmers…And I don’t think they would limit themselves to one asset as well. I think they would take on additional assets where they see growth.”

Credit Suisse analyst Grant Saligari says while there may be some investor caution about the offer for Kidman, given Wesfarmers’ lack of experience in lithium, the conglomerate had substantial experience in downstream chemicals processing, and important experience at managing regulatory processes in WA.

“The acquisition of Kidman Resources would position Wesfarmers with a 50 per cent share in a project with a long duration resource, favourable cost position and potential further value from the expansion of downstream processing over the longer term,” Saligari said in a note to clients.

While the recent corporate moves by Wesfarmers are generating substantial interest, when the size of the $41.2 billion company is considered they do not come at an overwhelming cost.

The $776 million for Kidman is little more than one-third of the revenue generated by Wesfarmers’ Officeworks in fiscal 2018. It is also less than the $1 billion increase in revenue recorded by Bunnings in fiscal 2018.

The corporate giant is clearly hoping that a relatively modest outlay, given its scale and balance sheet, could generate an electric return.

Darren is the mining and agribusiness reporter for The Age and The Sydney Morning Herald.

This woman allegedly using her boyfriend’s credit card to leave a $5,000 tip is...