While swiping on the dating app Bumble, Laurann O’Neill, 26, found someone who caught her eye — for all the wrong reasons. He was 23, attractive and obnoxious. Evan referred to himself as an entrepreneur. His dating profile featured a photo of himself popping a bottle of champagne on a boat. His perfect first date was “Jumping on a private jet with no destination.” Another photo showed him and a friend casually reclining on a private jet.

‘I have my skydiving license, I’ve totaled a brand new Lamborghini Aventador, I personally know the royal family of Luxembourg.’

Singles are selling themselves short on dates by bragging about their social status and wealth, but this was a whole new level. There was a shot of him behind the wheel of a Lamborghini LAMBO, -5.00% “I have my skydiving license, I’ve totaled a brand new Lamborghini Aventador, I personally know the royal family of Luxembourg.” That was his response to a “two truths and a lie” question.

“He’s the perfect example of an eye-roll profile,” O’Neill, a law clerk who lives in the Riverdale neighborhood of the Bronx, told MarketWatch. She stumbled on the profile last month while watching “Vanderpump Rules,” an L.A.-based television show about a bunch of spoiled millennials. Reality television shows like “Keeping Up with the Kardashians,” and YouTube GOOG, -0.47%  influencers may be fueling this problem. O’Neill sees an increasing number of profiles like this on dating sites.

On this particular evening, it felt like her dating life was imitating the rich kids on reality TV. Was this guy for real? She immediately took a screen shot of his photos and sent them to her friends in a “can you believe this guy?” text. She was amused by how ostentatious he was and — merely out of curiosity, she says — swiped right to match with him. That may have been the final insult: He didn’t swipe right back.

Others try more subtle tactics than merely saying they have an Ivy League education, posting a photo of their dog (next to their swimming pool), standing next to a boldfaced name at a black tie dinner, or smoking a giant cigar while leaning against a red sports car they may or may not own. It could even be a photo of their cute puppy, sitting on a balcony with a view of Central Park. The $2 billion-plus dating industry has a lot of players, some are more authentic and humble than others.

Don’t miss: Women who earn more than their husbands find another glass ceiling at home

In millennial speak, this boastful behavior is called ‘flexing.’ Rather than employing subtlety, it involves showing off your social status in a boastful way.

The more subtle singletons set up dating profiles stating, ”New Yorker competition winner” (translation: “I’m smart”) or ”looking to find a slower pace of life after selling my technology business” (translation: “I’m rich!”). Others have received messages saying, ”I’m just on my way to my house in the Berkshires” or “like to spend my weekends at my place in the Hamptons” (translation: “I’ve got lots of money and you can enjoy it if you play your cards right”).

Welcome to the age of aspirational dating, where singles are selling themselves short by over-selling themselves online and, if they get past Tinder, on a first date. In millennial speak, bragging about your wealth and social status is called “flexing” or, according to Urban Dictionary, “showing off your valuables in a non-humble way.” Trying to seamlessly work it into your dating profile as part of a larger conversation is, of course, humblebragging.

Millennials and everyone else have honed their skills on Facebook and Instagram FB, -0.26% where people craft the perfect, if not entirely accurate, narrative of their life. “Dating apps have become an extension of social media,” says Dan Ilani founder of Sweatt, a fitness-based dating app, in terms of people going to great lengths to portray themselves in a flattering light. It’s the Instagramization of dating — showing your “filtered” self instead of your real self.

A vacation photo sitting on a yacht is worth more than a 1,000 words, but flaunting your lifestyle may also sink your chances of a date. “There’s been more of a shift toward people showing off experiences rather than showing off material possessions,” he says. But, like the best marketing, it’s not always subtle. “It’s like, ‘Here I am in Thailand,’ but are you sharing that picture because you loved being in Thailand, or because you’re showing off your vacation?”

Also see: Your partner’s credit score reveals red flags that have nothing to do with money

Exaggerating your successes to impress others seems to be more common among men than women. One study released last month, “Bullshitters. Who Are They and What Do We Know about Their Lives?,” found that men are more likely than women to engage in such braggadocious behavior. Wealthier people are more prone to hyperbole than lower income individuals, the researchers from at the University College of London and the Australian Catholic University found.

‘Dating apps have become an extension of social media in terms of this attempt to curate a specific image of what you’re trying to portray about yourself.’

Some dating veterans caution against believing everything you hear. Jessie Breheim, 24, a marketing manager from St. Paul, Minn. can attest to dating someone with an inflated ego. The duo met on the dating site Plenty of Fish a little over two years ago. On the first date, he said he was friends with business tycoon David Geffen, and bragged about coming from money. It wasn’t exactly humble, but it was exciting (at first). 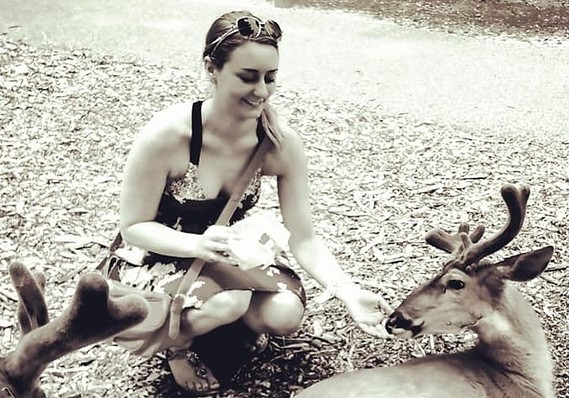 Jessie Breheim, 24, a marketing manager from St. Paul, Minn. can attest to dating someone with an inflated ego.

Of course it can work, at least for a time. At first, she was taken aback by his famous connections and she had never met any legendary Hollywood moguls or hung out with movie stars and, well, wouldn’t that be nice? But she soon realized he was being less than truthful about his wealth. Her first clue: She was paying for most of their dates. “I was pretty shocked when I saw a food-stamps card in his wallet,” Breheim says. “Not only was he broke but he was a liar.”

Breheim is hardly the first person to be misled. Dating sites are a hotbed of FaceTune (where people smudge away their wrinkles) and white lies (age, height and glamorous backdrops that may or may not be the person’s home). A whopping 53% of Americans said they’ve lied in their online dating profiles, according to a study commissioned by BeautifulPeople.com. More dating sites encourage people to connect via Facebook FB, -0.26%  and use their real first names.

Bela Gandhi, founder of Chicago-based Smart Dating Academy, says you can be proud without sounding pretentious. “If you say something like, ‘I’ve got a job as an executive that I love and am so grateful to have it, it keeps me on my toes and I’m meeting interesting people,’ that’s a humble brag, but it’s also done in a way that makes you sound passionate about your job,” Gandhi says. Of course, even that won’t fool all of the people all the time.

There’s a fine line between humblebragging, bragging and, well, sounding desperate. Less is more. Save the #feelingblessed hashtags next to a photo of your feet and a glass of wine in front of a Fiji sunset for your private Facebook page. If you feel like you’re trying too hard to impress your date, you probably are. “You want to connect on a personal level,” says Gandhi. “You’re not there to get hired, you’re there to get a second date.”

Jessie Breheim never did get to meet David Geffen.